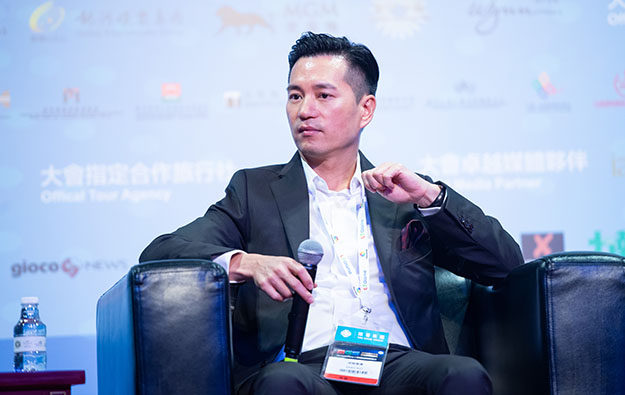 A division head at Macau’s casino regulator told a court session on Monday that the body had not found any suggestion of “extraordinary income” potentially originated from illicit activities when it reviewed fiscal statements supplied by former Macau junket operator Tak Chun Group. Those documents were periodically submitted to the regulator in a period from 2016 onward.

Wong Long Peng, head of the compliance audit division at Macau’s Gaming Inspection and Coordination Bureau, also known as DICJ, was giving evidence at the Court of First Instance.

She was questioned by the prosecution in relation to the indictment naming former Tak Chun Group boss Levo Chan Weng Lin (pictured in file photo) and eight other defendants, including several former executives of the junket firm.

Mr Chan and the other defendants have been charged with crimes including being a member of an illegal criminal organisation, illicit gambling operations, defrauding the Macau Special Administrative Region government and the city’s six casino concessionaires, and money laundering. They are also accused of operation of under-the-table bets – also known as ‘multiplier betting’ – and of ‘proxy betting’, stated as violations of Macau’s Law No.8/96/M, the Regime of Illicit Gambling, according to the indictment.

During Monday’s court session, Ms Wong was questioned by prosecutor Lai U Hou on whether her regulatory team had, during regular inspection work regarding Tak Chun Group’s fiscal statements, found any information that suggested it had engaged in proxy betting or under-the-table betting.

“Based on the fiscal information submitted by Tak Chun Group, the income they reported generally conformed to the commissions paid by casino concessionaires to the group,” Ms Wong told the court. She added that the figures presented by the junket firm had always been considered by her regulatory team as “reasonable”.

The DICJ official however noted that the assessments by DICJ were based on financial information solely supplied by Tak Chun Group. “If they withheld any document from us, it is possible that we could have missed some information… What we did was to crosscheck as much accounting information as possible [with information provided by the casino concessionaires],” she said. “And we did not encounter many problems.”

DICJ’s Ms Wong told the court her bureau acknowledged that Tak Chun Group had failed to provide to the regulator, “for two to three years”, reports of “suspicious transaction reports”, as required by Macau’s anti-money laundering rules. The city’s gaming operators, including junkets, are required to report to the local government any transaction of MOP500,000 (US$61,800) or above – including the player’s identity – although that does not mean that such a transaction will be necessarily flagged as suspicious.

The DICJ official testified in October in a separate court case involving former Suncity Group boss Alvin Chau Cheok Wa. Mr Chau and 20 other defendants face charges of illegal gaming, criminal association, fraud and money laundering. The verdict of their case is expected to be announced on January 18.

During Monday’s court session, Ms Wong was asked about an estimate of the potential losses suffered respectively by the Macau SAR government and the city’s casino concessionaires as a result of the alleged under-the-table betting scheme run by the defendants.

Four Macau casino operators have confirmed civil compensation claims amounting in aggregate to just over HKD134.7 million (US$17.3 million) against Mr Chan and a number of other defendants, in relation to allegations of their criminal conduct regarding VIP gaming business. The Macau government is claiming HKD575.2 million – being the amount of gaming tax it estimates it lost as a result of under-the-table bets alleged in the criminal case, as mentioned in Monday’s hearing.

Ms Wong was questioned about the nature of under-the-table bets, also known as multiplier bets. The “multiplier” is said to be a private arrangement where the face value of the player’s bet shown on a table is multiplied many times for the purposes of play and bet settlement.

“I would describe it [under-the-table bets] as an act of deliberate tax evasion” regarding the tax on gross gaming revenue that is payable to the government, Ms Wong said.

The DICJ official also confirmed the existence of a guideline issued by the casino regulator in 2018 banning the promotion inside any Macau casino of overseas gambling activities, as well as banning the use of Macau casino facilities for purposes of facilitating the settlement of gambling wagers related to overseas play. Ms Wong admitted that such guideline had never been made public, only being distributed to relevant industry operators.

Some Macau casinos visited by GGRAsia on Thursday, actually had tables that were closed, notwithstanding strong consumer demand during Chinese New Year (CNY). The reasons for some tables being... END_OF_DOCUMENT_TOKEN_TO_BE_REPLACED