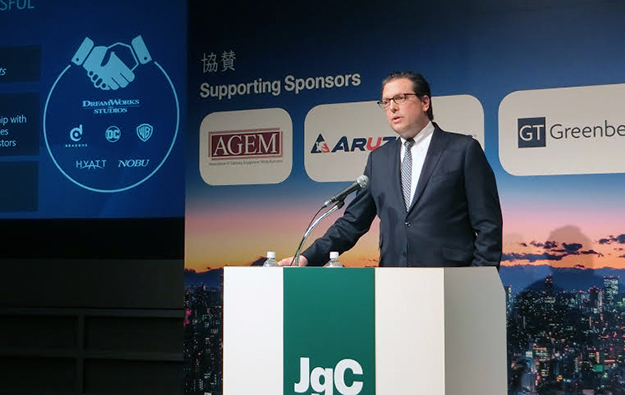 It would be “presumptuous at this point” for suitors to a Japanese casino licence “to have a definitive view of what is going to be built in Japan”.

That was the view expressed by Geoffrey Davis (pictured), executive vice president and chief financial officer of Melco Resorts and Entertainment Ltd, currently a firm with casino operations in Macau and the Philippines, but with its eyes firmly on Japan.

Mr Davis’ boss, Melco Resorts’ chairman and chief executive Lawrence Ho Yau Lung, had said at the CLSA Japan Forum 2017 in February – an investor conference in the Japanese capital Tokyo – that his firm would “absolutely spend whatever we need to win” a Japan casino licence.

The CFO’s own comments came during a presentation on the first day of the Japan Gaming Congress in Tokyo on Wednesday, a conference organised by Clarion Events Ltd.

Banking group Morgan Stanley said in a December 15 note that any casino venue or venues in Japan might only open after the year 2021, adding that a second piece of legislation – possibly to be passed by the end of this year – was necessary to establish the administrative framework of the industry.

Following the passage on December 14 of an enabling bill to legalise casinos in Japan, a number of investment analysts mentioned the possibility that foreign firms with expertise in casino operations might link – in likelihood as minority partners – with Japanese firms looking for new growth opportunities at home, in order to bid jointly for a Japanese casino licence.

It was revealed this week that Melco Resorts would no longer be bound by an earlier agreement to work with Australia’s Crown Resorts Ltd in a Japan licence bid. It followed news that Crown Resorts was disposing of its remaining stake in Melco Resorts.

Aegis Capital Corp analyst David Bain said in a recent note: “Our contacts suggest Melco Resorts has made significant headway with a very significant potential partner based in Japan.”

“There currently is no predetermined cap on our intended investment in Japan; our focus is on uniqueness, great design and world-class entertainment offerings,” a company press release issued at the time of the CLSA Japan Forum, quoted Mr Ho as saying.

The group’s CFO noted on Wednesday in Tokyo: “What we are thinking is all about innovative, unique, really groundbreaking design.”

Mr Davis added: “We are not about cookie cutter development. We are not going to pick up a property [design] in one market and put it in another. We’ll be inspired to do something unique and spectacular.”

The finance boss also mentioned what he said was the company’s good track record in tackling and preventing problem gambling. The subject is much discussed among Japanese lawmakers, even those in favour of the casino legalisation policy.

“We are committed to social safeguards… Addressing compulsive gaming issues with a multi-tiered approach; with community education, employee education, support networks and self- [and] third-party exclusion initiatives,” said Mr Davis.

“We are also pioneering the use of technology such as facial recognition to help in that respect,” he added.

Facial recognition equipment has been in the news this week in the context of Asian casino markets, after the Macau government announced that such technology would be installed at automated teller machines in the casino hub, as a way of verifying the identity of people using Chinese mainland-issued bank cards from China UnionPay Co Ltd.