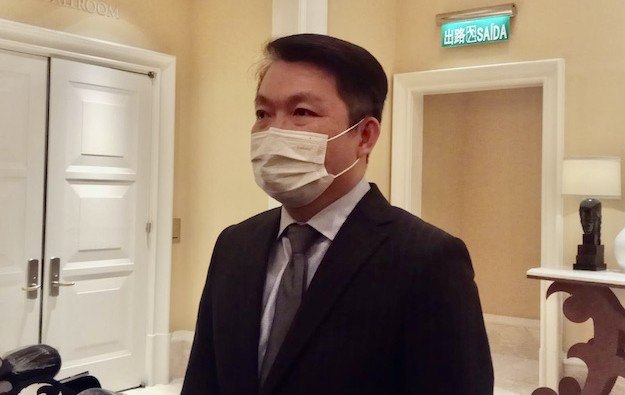 Macau had over 30,000 visitor arrivals on Friday, for the first time since July, and authorities expect the daily tourist tally to be even higher during October’s Golden Week holiday period, said on Sunday Lei Wai Nong (pictured), the city’s Secretary for Economy and Finance.

In comments to local media on a public occasion, Mr Lei stressed that the number of visitor arrivals recorded on Friday was higher than the daily average seen in the first half of 2020.

The October Golden Week has in pre-pandemic times been a peak period for tourism to Macau, and for casino revenue there.

MGTO will launch promotional events and invest in advertising, “to show that Macau is a safe place to travel,” Mr Lei said.

The city had 165,500 visitor arrivals for the five-day holiday period surrounding Labour Day on May 1, meaning there was a daily average of 33,100 arrivals, according to data from the city’s Public Security Police, the force responsible for running Macau’s immigration checkpoints.

MGTO said the drone performance would offer “a new experience” to visitors and “introduce a new entertainment element” in Macau’s tourism.

The city received 31,829 visitor arrivals on Friday, the highest tally since August 3, when the Macau government announced that a local family of four had tested positive for the highly-infectious Delta variant of Covid-19, MGTO said.

Between September 3 and 9, the city welcomed over 168,300 visitors, a daily average of about 24,000, up by 82.2 percent from the August average, according to the tourism bureau.

The city’s hotels saw their average occupancy rate reach 46.2 percent in the week from September 3 to 9, 10.8 percentage points higher than in August.

MGTO said it will launch more online and live promotional campaigns in in the second half of this year, in a bid to attract more mainland visitors to the city. Mainland China is currently the only place to have a largely quarantine-free travel bubble with Macau.

Some Macau casinos visited by GGRAsia on Thursday, actually had tables that were closed, notwithstanding strong consumer demand during Chinese New Year (CNY). The reasons for some tables being... END_OF_DOCUMENT_TOKEN_TO_BE_REPLACED