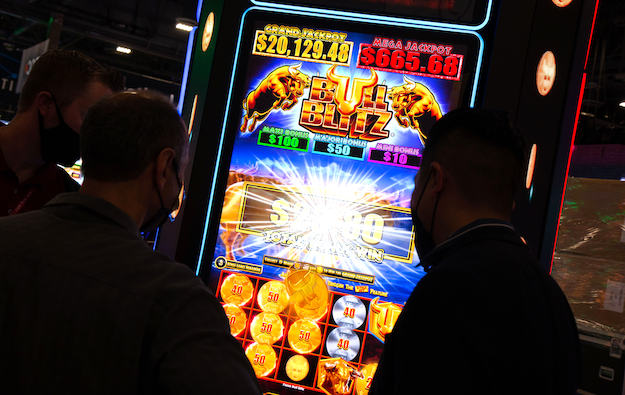 The Macau government’s wish to see less reliance on mainland China customers in the city’s casinos, and more overseas players, could see the electronic gaming machine segment change and grow in importance in the Macau market, says a senior manager at equipment supplier Aristocrat Technologies Ltd.

The contribution of slot machines specifically in the Macau industry has during recent years consistently stayed in the range of mid- to higher-single digits of percent in terms of casino gross gaming revenue (GGR), according to government data.

“Every other market outside of Macau” is “larger” in terms of the weighting of the revenue provided by electronic games, said Lloyd Robson, general manager for Asia Pacific at Aristocrat Technologies Macau Ltd.

Although there will be a 12,000-machine cap in the market under the new 10-year casino concessions expected to start next year, “we do know that the [Macau] government is trying to incentivise non-mainland [China player] activity by having a lower taxation rate,” noted Mr Robson, referring to a possible incentivisation scheme for Macau operators in terms of GGR tax rate on play by overseas customers.

“So if that’s to occur, we need to look to other markets around the world including in Asia,” to supply players for the Macau market, he added. “That would involve looking at what non-mainlanders are participating in,” games wise, the Aristocrat executive stated.

Ken Jolly, vice president and managing director for Asia at gaming equipment and content supplier Light & Wonder Inc, noted during the same panel, that on a generic basis, suppliers and operators were increasingly looking at the gathering and timely analysis of data available via gaming machines and gaming tables, to understand better the preferences of the consumers playing the games.

He said it was increasingly common for manufacturers to “take data from the gaming products,” and use that to create “automated systems that can actually help each of the venues to develop their businesses and their player bases”.

Though Mr Jolly acknowledged that such steps depended on working with regulators in individual markets to make sure they were comfortable with accepting technical developments such as use of ‘big data’.

Aristocrat’s Mr Robson noted that from his firm’s side, in the context of Macau exploring new source markets for players, “we certainly see an opportunity to work with the operators to try to understand which demographics they are trying to target outside of the mainlanders, from a GGR perspective”.

The executives were speaking during a panel session of the MGS Summit 2022 on Wednesday, an online event for the casino industry, promoted by the Macau Gaming Equipment Manufacturers’ Association.

The possibility of bringing different slot product to the Macau floors from that employed previously to serve predominantly mainland China customers, would “not quite” be “cut and paste” from what was found in other markets, but it would give equipment suppliers and the Macau industry the opportunity to “try to experiment with some different solutions” product-wise, said Mr Robson.

Some commentators on the Macau industry have in the past mentioned that even in the slots segment, a disproportionate amount of play had been by high rollers, rather than mass-market players.

Changes in the Macau market in likelihood meant that it would have “lower VIP or ‘high limit’ potential moving forward,” said the Aristocrat executive.

“That lends itself to the operators probably having to go more mass-market strategy, and most mass markets around the world have a greater role for electronic gaming,” he stated.

Michael Cheers, sales director at slot machine maker International Game Technology Plc’s regional unit IGT Asia, told the panel that his firm “certainly sees more growth in the mass-market” in future in Macau, and that such a development “lends itself well to slot play generally”.

Aristocrat’s Mr Robson observed that while Macau was seeking to incentivise Macau operators via lower taxation on play by overseas customers, that might take time to feed through into the market. There was “a little bit of a higher risk until they get those players through the door,” in terms of market earnings, he added.

In the context of the fact that under the new Macau gaming concessions, there would be a minimum annual GGR expected from operators per gaming machine and table, that could create some “risk aversion” among operators in terms of deploying new electronic gaming products rather than tried and tested ones, he added.

“There’s always a desire for innovation [in the industry] but with innovation comes risk. And sometimes that measurement of risk is at the win-per-unit level,” Mr Robson told the panel.

The decision by the Macau government to grant fresh 10-year licences to each of the city’s six incumbent casino operators has been welcome by top management at those firms. Each of the concessions... END_OF_DOCUMENT_TOKEN_TO_BE_REPLACED