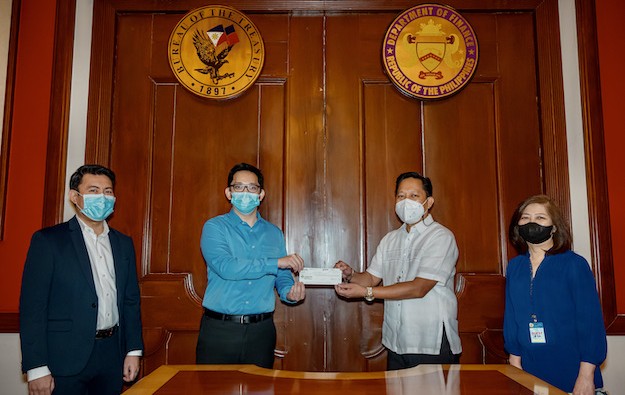 The Philippine casino regulator says it has passed on PHP6 billion (US$116.8 million) to the country’s treasury. The Philippine Amusement and Gaming Corp (Pagcor) said in a Monday press release the amount represented PHP1.04-billion in “declared dividends” for 2021, and PHP4.95-billion in “advance cash dividends, that may be applied against future dividend obligations”.

Recto Baltazar (pictured centre, right), Pagcor vice president in its finance group, presented a cheque for the amount to Ed Mariño (centre, left) national deputy treasurer, at a Bureau of the Treasury office in Manila.

Pagcor stated its latest remittance was “in response to the request of Department of Finance Secretary Carlos Dominguez for support to the government’s funding of the increase in social expenditures, to mitigate the impact of the Russia-Ukraine conflict on… vulnerable sectors” in the Philippines. That was understood to be a reference to consumer inflation internationally on certain staple products, amid trade disruption linked to the war.

Pagcor chief executive and chairman Andrea Domingo was cited as saying in the press release: “We are now gaining momentum towards economic recovery as all businesses, including the gaming industry, are now on full operational level and revenues start pouring in once again.”

She added: “This enables us to fulfill our financial obligations with the government and to remain committed as one of its major partners in nation-building.”

The improvement in GGR performance in the final quarter of 2021 coincided with the easing of capacity restrictions in November for the country’s casino sector, including at Entertainment City.

Since March 1 this year, Metro Manila has been placed under “alert level 1”, the lowest level of countermeasure against Covid-19, which allows business to operate at full capacity.

Macau is to create distinct zones on its casino floors and designated gambling chips that will be solely for the use of players from overseas. The moves will be part of a new gaming tax system to... END_OF_DOCUMENT_TOKEN_TO_BE_REPLACED