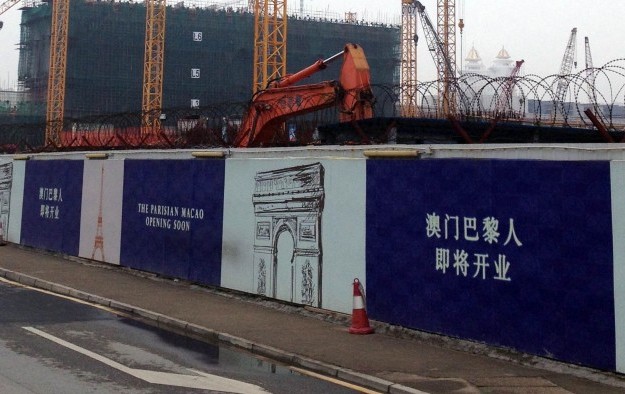 Sands China Ltd expects to receive government approval in October to restart work on its US$2.7 billion Parisian Macao project in Cotai. Sands China’s parent firm Las Vegas Sands Corp said so in a filing in its second quarter 2014 results lodged with Nasdaq in New York on Thursday.

Portuguese-language newspaper Jornal Tribuna de Macau subsequently reported that Macau officials had imposed an embargo on a swift restart on the grounds that Sands China did not have the necessary permits to proceed.

Macau’s Land, Public Works and Transport Bureau was cited by the newspaper saying that the contractor has permission only to do earthworks on the site. However, the contractor has already built a structure of approximately 10 floors in height.

Sands China declined at the time to comment to GGRAsia on that report.

GGRAsia has made several requests to the bureau – the government body responsible for overseeing and granting permits on such large infrastructure projects – as to the reasons for the halt on the Parisian, but has received no response so far.

But on Thursday Las Vegas Sands said in its quarterly filing: “The company had commenced construction activities, but stopped in June 2014, pending receipt of certain government approvals, which management has been informed are scheduled to issue in October 2014.”

The parent firm added: “In the meantime, the company is working to accelerate the permit approval process and, as with projects of this nature, will continue to analyse options for both a full and phased opening of the facility in 2015.”

In the same filing it said the property was “currently expected to open in late 2015”.

The property, which will be connected to the Venetian Macao and Four Seasons Macao, is to include a gaming area, a hotel with more than 3,000 rooms and suites and retail, entertainment, dining and meeting facilities, said the filing. It did not specify how many gaming tables the casino portion might have.

The imminent return of package tours from mainland China will not only help boost Macau’s tourism businesses, but is also expected to help casinos gain more foot traffic in their mass gaming... END_OF_DOCUMENT_TOKEN_TO_BE_REPLACED