Rooms at Sands China Sheraton back for Macau quarantine 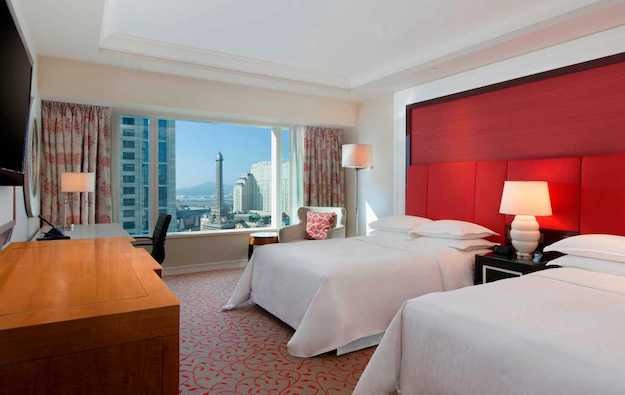 About 2,000 hotel rooms at the Sheraton Grand Macao property have again been allocated for Macau government use amid the city’s latest response to the Covid-19 emergency.

The hotel (pictured in a file photo) is located at the Londoner Macao complex, operated by Sands China Ltd, a unit of United States-based casino group Las Vegas Sands Corp.

The utilisation of some of the 4,000-room Sheraton Grand Macao’s facilities was outlined in a Saturday announcement by the Macao Government Tourism Office (MGTO). The role of that portion of the hotel came into effect on Sunday.

The announcement did not disclose a specific length of time for the Sheraton Grand Macao to maintain its reprised role in the city’s quarantine programme.

Macau entered “immediate pandemic prevention” mode from the stroke of midnight on Saturday due to the risk of a community outbreak of Covid-19 after two people living in Macau tested positive for the illness.

Depending on the places where travellers were staying before arriving to Macau, the compulsory medical observation period required by the Macau health authorities can reach up to 28 days.

Sheraton Grand Macao is now considered a designated hotel. In previous periods, the property was used as an optional accommodation for quarantine purposes.

Properties in Macau currently being used as optional quarantine venues include the Grand Coloane Resort, in Coloane; the Regency Art Hotel, in Taipa; and the hotel at the Lisboeta Macau complex, on Cotai. The latter property opened on July 17 some of its leisure attractions to the public.

The local authorities said at press conference held this morning that 1,573 people remain under medical observation in Macau, either in hotels used for quarantine or in Health Bureau premises.

On the same day, the government suspended passenger ferry services between the Inner Harbour Ferry Terminal in Macau and the Wanzai border post in Zhuhai, Guangdong, as well.

The ferry link to Wanzai had only resumed on September 14, after a suspension of more than a month amid a Covid-19 alert across the region.

Within the overall pandemic alert period, mainland China has been the only jurisdiction with a largely quarantine-free travel arrangement with Macau.

However, amid the latest emergency, a 14-day mandatory quarantine rule, in effect from Sunday, for those entering Zhuhai from Macau – including mainlanders returning from a Macau trip – will remain in force at least until 29 September (Wednesday), except for those working in the logistics industry, funerals sector or in medical services.

A casino cruise brand reportedly controlled by Malaysian entrepreneur Lim Kok Thay is to launch services from Singapore fewer than five months after the Lim family-founded Dream Cruises brand of the... END_OF_DOCUMENT_TOKEN_TO_BE_REPLACED