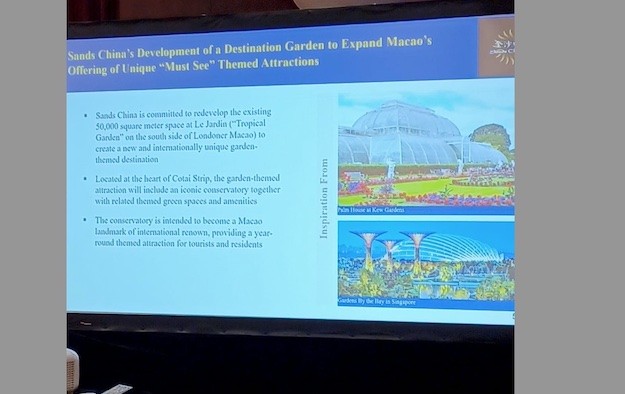 Sands China Ltd plans to transform its 50,000 square-metre (538,196 sq-feet) garden next to its Londoner Macao property on Cotai, by adding a glass conservatory (pictured in an artist’s rendering) to create an “internationally unique garden-themed destination”.

Wilfred Wong Ying Wai, president of the firm, gave the information on Saturday as part of a series of presentations by the six newly-reinstalled Macau concessionaires, who signed new contracts on Friday with the city’s government.

Mr Wong said the idea was to create something iconic, akin to the tourism draw of Gardens by the Bay, a garden close to Marina Bay Sands, the Singapore casino resort of Sands China’s parent, Las Vegas Sands Corp.

Sands China’s management had in the past talked about the possibility of putting a shopping mall on the Cotai plot, but later decided to develop it as a French-themed garden dubbed “Le Jardin”. It overlooks the group’s Parisian Macao resort on the opposite side of the Cotai Strip.

All the Macau operators have pledged to the government to spend in aggregate MOP108.7 billion (US$13.6 billion) on non-gaming and exploring overseas-customer markets, in the course of the 10-year concessions, due to start on January 1.

Sands China has pledged to invest MOP30.0 billion up to the 2032 end of its new concession, with MOP27.8 billion of that to go on “non-gaming projects that will also appeal to international visitors,” it stated in a Saturday press release.

Sands China stated additionally that it was “committed to expand the area, improve and optimise the scale and quality of its convention centres and related facilities”. Such commitment, it added, includes the development of a new, approximately 18,000-square-metre (193,750-sq.-feet) facility for conventions and exhibitions, and other related amenities adjacent to the Cotai Expo, at its Venetian Macao casino resort.

The company also said it would strengthen its international marketing of convention tourism “in order to attract global multinational companies to host annual meetings and corporate summits in Macau”.

The firm stated in particular it would make what it termed a “meaningful reinvestment and upgrade of the Cotai Arena” at its Venetian Macao resort, in order to expand the group’s offer of entertainment and sporting events.

The group noted in a follow-up press release it planned on “increasing the company’s network of international sales offices in Asia and the United States/Europe,” and on “hosting an annual large-scale international business exchange event – “Macau Showcase” – at its Marina Bay Sands property in Singapore to elevate the exposure of Macau as a MICE [meetings, incentives, conferences and exhibitions] tourism destination.”

The casino operator said it also plans to create a “Macao Heritage Carnival”, to be hosted throughout traditional areas of the city.

International casino operator Las Vegas Sands Corp has been ranked as the most sustainable firm in the global casino sector, according to the 2023 edition of the S&P Global Sustainability... END_OF_DOCUMENT_TOKEN_TO_BE_REPLACED