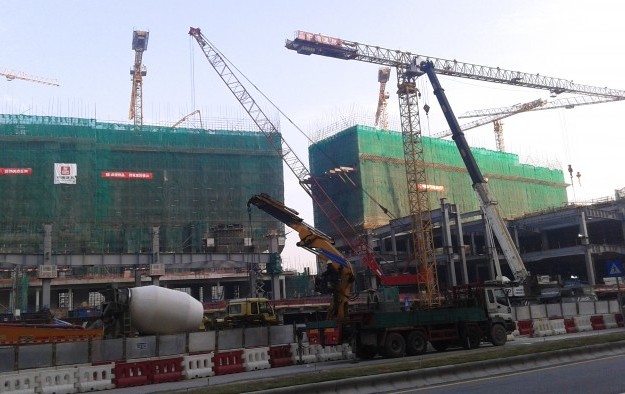 A senior executive of MGM Resorts International on Wednesday described any notion of selling down or selling off its 51 percent stake in Macau casino operator MGM China Holdings Ltd as “a very bad idea”.

William Scott, who has served as executive vice president of corporate strategy and special counsel at MGM Resorts since July 2010, was speaking on the sidelines of the Global Gaming Expo (G2E) Asia 2015 conference at the Venetian Macao.

Mr Scott said: “We consider all ideas. But some ideas are not good ideas. And selling down the interest we have in Macau…I think the reverse would be true. MGM [Resorts] would like to increase its stake in MGM Macau [MGM China]. We’d like to make broader investments in MGM Macau [sic].”

MGM China is currently spending US$3 billion in capital costs on a new Cotai casino resort called MGM Cotai (pictured), which is currently slated to open in the autumn of 2016.

Vitaly Umansky, senior research analyst of global gaming for Sanford C. Bernstein Hong Kong Ltd told GGRAsia on the sidelines of day one at G2E Asia 2015 conference that several of the current Macau casino operators could become targets for buy outs by Chinese investors “in the longer term”. He didn’t name any potential candidates for such deals

The context of his remarks was what might happen in the lead up to the expiry of the six Macau operators’ current concessions in 2020 (in the case of MGM China and SJM Holdings Ltd) and 2022 for the rest.

MGM Resorts – currently under some pressure from institutional investors to increase shareholder value – said on its first quarter earnings call that it would consider the sale of “any of our assets” to reduce its substantial leverage.

An industry source on Wednesday told GGRAsia that were Japan to legalise casino gambling and were MGM Resorts to seek to build a multi billion U.S. dollar resort in that country – as it has indicated – there would be pressure from the firm’s investors not to increase borrowings. MGM Resorts’ chairman and chief executive James Murren said at a conference in Japan last May that his firm might seek to launch a Japan initial public offering (IPO) to help fund such a project.

Mr Scott on Wednesday explained why MGM Resorts had only increased its stake in MGM China from 50 percent to 51 percent, following an IPO for MGM China in May 2011 that raised US$1.5 billion.

The MGM Resorts executive – who was involved in setting up the IPO – said of the MGM China flotation: “It was a carefully constructed transaction. In 2009, MGM was levered 11-plus times. And the banks were putting a lot of pressure on us, our shareholders were putting a lot of pressure on us – the economic situation was terrible – and so it was natural to try and raise cash. And the initial conceptions of the IPO were that both partners would sell down in a secondary offering.”

He added: “So that was what I was sent over here to do [at the time]: get an IPO done, that resulted in a cash bolus, because candidly, we needed it and our banks wanted it. Once we got the extension of our bank credit lines in 2010, that need became less compelling… The question became ‘What’s best for the stakeholders?’ The question I was asked this morning was ‘Is MGM committed to this market?’ Yes, we are abundantly committed to this market. We’re spending US$3 billion on a resort next door [on Cotai].”

A Connecticut-based hedge fund that argues shareholder value in MGM Resorts has been mismanaged relative to industry peers said on Tuesday that it is ending its proxy fight with the casino operator.

Land and Buildings Investment Management LLC had proposed three of its own candidates for the MGM Resorts board in a vote due at the annual general meeting on May 28.

But the hedge fund said in statement on Tuesday: “Since our initial engagement with MGM in January 2015, the company and its insider shareholders have finally taken a series of steps that, in our view, can help address the company’s persistent undervaluation and underperformance.”

The hedge fund, founded by Jonathan Litt, cited the changes as including the hiring by MGM Resorts of financial advisors to evaluate the separation of its real estate holdings from MGM Resorts’ operating business through the formation of a real estate investment fund (REIT).

MGM Resorts said in a statement on May 13 that independent proxy advisory firm Institutional Shareholder Services Inc had recommended MGM Resorts’ shareholders vote for the re-election of all 11 of MGM’s director nominees.

On May 15, Land and Buildings announced that Glass, Lewis and Co – another leading independent proxy voting advisory firm – had recommended that MGM Resorts shareholders vote to elect Land and Buildings’ nominee Matthew J. Hart as a member of MGM Resort’s board of directors.

The liquidity of casino group Las Vegas Sands Corp is “strong”, with over US$6.4 billion of consolidated cash and nearly US$3.5 billion of undrawn revolving credit facility capacity, said a... END_OF_DOCUMENT_TOKEN_TO_BE_REPLACED