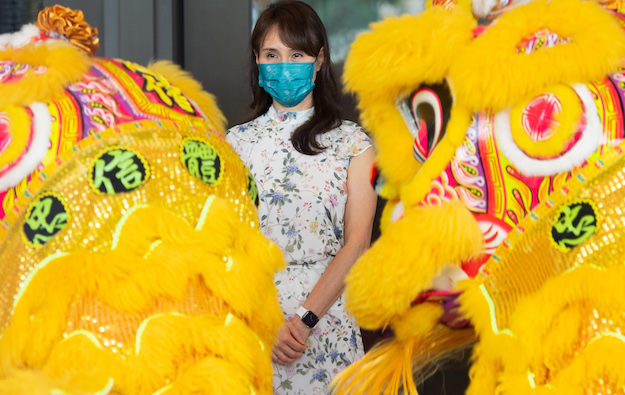 Macau casino operator SJM Holdings Ltd plans to reallocate to its Grand Lisboa Palace resort a total of 118 gaming tables, part of its inventory available elsewhere. The announcement was made by company chairman Daisy Ho Chiu Fung (pictured) on Friday, on the sidelines of a ceremony to mark the opening of the first phase of the Cotai property.

“We need to allocate 118 gaming tables from other venues, and for that we are preparing for the respective VIP and mass allocation,” Ms Ho said, as reported by the Chinese-language radio service of the city’s public broadcaster TDM.

Macau’s casino regulator, the Gaming Inspection and Coordination Bureau, confirmed in a reply on Thursday to GGRAsia it had granted SJM Holdings a total of 150 new-to-market gaming tables for Grand Lisboa Palace at opening. The bureau added that all new tables granted were for mass-market gaming. There was no new table allocation for VIP play.

“These 150 newly-granted gaming tables are all for mass market,” Ms Ho confirmed on Friday. “As for VIP tables, we will tranfer them from other venues, which will be our next stage, and is coming soon,” she added.

In a filing on Thursday to the Hong Kong Stock Exchange, SJM Holdings confirmed it had been authorised by Macau’s regulator to “request the transfer of additional gaming tables to casino Grand Lisboa Palace from other casinos” operated by the firm. The company did not elaborate on the filing whether it had already requested the transfer of any gaming tables to the Cotai property.

The filing added that the regulator had “approved the installation of 1,200 new slot machines [at Grand Lisboa Palace], with specific limits on the numbers that can be installed and be in operation at the time of opening.”

During the first quarter this year, SJM Holdings operated an average of 177 VIP gaming tables, and 1,066 mass-market tables, the firm said in selected unaudited key performance indicators published in May.

As of March 31, SJM Holdings had a total of five self-promoted casinos, and 14 gaming venues in Macau were managed by third parties but were using the SJM Holdings’ gaming licence.

The HKD39-billion (US$5-billion) Grand Lisboa Palace casino resort is SJM Holdings’ first foray into Macau’s Cotai district. The property was originally expected to open by “the end of 2020”, according to previous company information.

The first phase of the Cotai scheme includes casino space, some 300 guest rooms at the Grand Lisboa Palace Macau hotel, some restaurants, and space for events.

Macau mass-market casino gross gaming revenue (GGR) for the recent Chinese New Year (CNY) holidays could have recovered to at least 60 percent of that for the 2019 break, when the festivities were in... END_OF_DOCUMENT_TOKEN_TO_BE_REPLACED