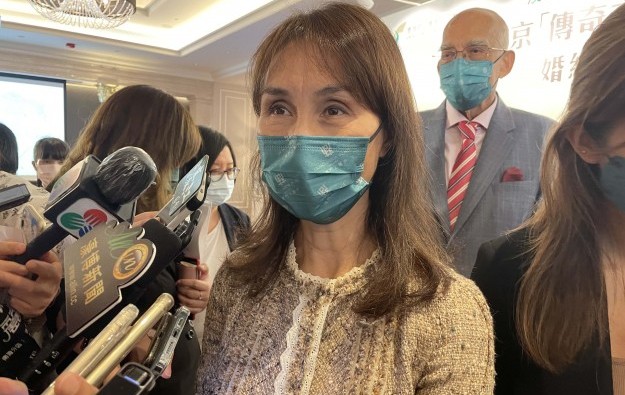 Macau casino operator SJM Holdings Ltd’s chairman and executive director, Daisy Ho Chiu Fung (pictured), said on Thursday the company was currently “working through the final details” on the refinancing of syndicated banking facilities with lenders, in hope of completing the process “as soon as possible”.

Her comment was in response to a question from GGRAsia on the sidelines of a corporate event that day, at the firm’s Cotai casino resort, Grand Lisboa Palace.

In late February, SJM Holdings had extended by one year, the maturity of its syndicated banking facilities, originally consisting of a HKD15 billion (US$1.91 billion at current exchange rates) term loan, and HKD10-billion revolving credit, with HKD13.3 billion of the aggregate amount being outstanding.

That was according to a May 3 filing of the group’s unaudited first-quarter results to the Hong Kong bourse. The company noted that it expected to complete a refinancing of those facilities within the second quarter.

“Our team members have been incessantly working together with all of the banks in the syndicate through the final details [of the refinancing arrangement], in hope of completing the matter as soon as possible,” said Ms Ho in her Thursday comments.

She added: “I think for now we still feel very confident about,” completing the refinancing of  “syndicated bank facilities and that is the direction we are working towards. We are grateful for our parent STDM, that, in principle, they can…  support us by arranging provisional lending, if we need it.”

Earlier this month, several investment analysts cited remarks from management at SJM Holdings, indicating the company had the option to ask for an up to HKD5-billion loan from its largest shareholder, STDM, if faced with liquidity problems.

GGRAsia also asked Ms Ho on Thursday about the timetable for the launch of the Palazzo Versace Hotel, and additional leisure facilities at Grand Lisboa Palace.

She said: “Our opening timetable has not been certain yet, because it is dependent on the [Covid-19] pandemic situation. I think in these two years, the pandemic did pose a huge challenge. So we need to observe the Macau-bound visitor volume to decide the gradual launch time of the remaining facilities.”

Ms Ho’s company – along with the other five gaming concessionaires in Macau – is due to see its gaming licence to expire on June 26 this year. The Macau government has, to date, not announced yet whether it has approved their requests to extend the licence term to December 31, while the local authorities prepare a new public tender process.

Ms Ho was asked at the Thursday event, how many of the third-party investors linked respectively to those satellite gaming venues, had expressed interest in continuing their business in the light of proposed regulatory changes for the satellite sector.

She remarked only, that SJM Holdings had been “in talks” with the satellite venue partners and would announce the outcome in due course.

The Grand Emperor Hotel – a casino hotel located in Macau peninsula that relies on SJM Holdings’ gaming licence – has been the only satellite casino promoter to have made a formal announcement about ceasing its gaming operations on June 26.

Casino equipment supplier Sega Sammy Creation Inc said in a Friday release it was debuting its Genesis Crest 43J cabinet in Asia. The product will be available at an in-person trade show, G2E Asia:... END_OF_DOCUMENT_TOKEN_TO_BE_REPLACED