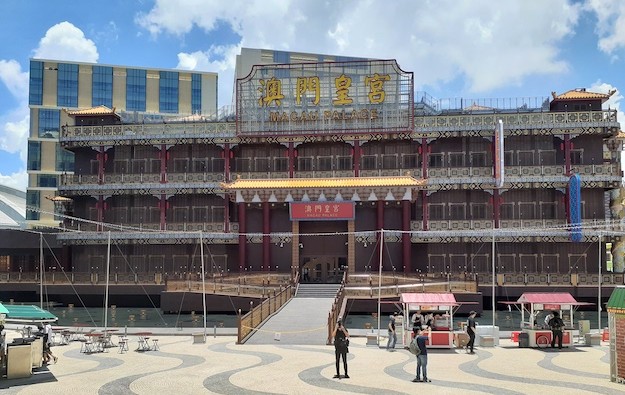 Lisboeta Macau is a leisure resort project next door to the yet-to-open HKD39-billion (US$5 billion) Grand Lisboa Palace, a scheme by SJM Holdings. The latter property will also include a self-promoted casino by SJM Holdings.

Lisboeta Macau opened on July 17 some of its leisure attractions to the public. These attractions include an indoor skydiving facility GoAirborne; a 388-metre long (1,273 feet) zip line ride branded as ZIPCITY Macau; and “Night Market @ Lisboeta”, an entertainment and catering zone in front of a replica of the Macau Palace “floating casino” (pictured).

Mr So said in his comments to Ming Pao that the casinos at Lisboeta Macau and Grand Lisboa Palace would cater for different customer segments. Ming Pao’s report did not feature details on the type of gaming patrons targeted for each property.

Mr So added that SJM Holdings had not yet reached an agreement with the owners of Lisboeta Macau – Macau Theme Park and Resort Ltd – regarding operating a casino at the property.

Besides reaching a deal with Macau Theme Park and Resort, SJM Holdings also needs to get regulatory approval in order to be able to open a casino at Lisboeta Macau.

Lisboeta Macau has long been seen by a number of gaming industry observers as a supporting facility to SJM Holdings’ Grand Lisboa Palace. According to SJM Holdings’ first-quarter highlights, published in May, Grand Lisboa Palace was due to open in the first half this year. In a press release issued last week, the company stated only that the Cotai property would be launched “soon”.

In separate comments to the Hong Kong Economic Journal, Mr So said SJM Holdings would not wait for the resumption of normal travel links between Macau, Hong Kong and mainland China in order to open the Grand Lisboa Palace complex. He added, as quoted on Monday’s edition of the Chinese-language outlet, that the property would open in phases. Mr So did not say when the first phase of the resort would be launched.

As of Monday, a hotel at Lisboeta Macau was still being used for quarantine purposes as part of Macau government’s response to the Covid-19 emergency. Another two themed hotels at the Cotai leisure complex – “Maison L’Occitane” and “Casa de Amigo” – are still under development.

No other requests to end satellite casinos

In his remarks to the Hong Kong Economic Journal, Mr So also commented on the decision of the current management of Casino Diamond – a so-called ‘satellite casino’ of SJM Holdings – to cease operations at the property at the end of this month, due to a sharp decline in business linked to the Covid-19 pandemic. SJM Holdings confirmed to GGRAsia that it was to take over the gaming operations at Casino Diamond as a self-promoted venue from August 1, 2021.

Mr So told the Hong Kong Economic Journal that no other partners at SJM Holdings’ satellite casinos had so far requested to end their service agreements with the casino operator.

Casino Diamond – located at the Holiday Inn Macau building in the downtown area of Macau peninsula – currently operates a satellite casino that uses the gaming rights of SJM Holdings. It means the property is promoted by a third party under a services agreement with SJM Holdings.

According to Mr So, SJM Holdings has a total of 13 other satellite casinos. The firm also operates five self-promoted casinos. They are: Casino Grand Lisboa, Casino Lisboa, Casino Oceanus at Jai Alai (including the gaming area in the neighbouring Jai Alai building), Casino Eastern and Casino Taipa.

Casino Taipa, at Regency Art Hotel, is temporarily closed, Mr So told Ming Pao. Regency Art Hotel is currently being used for quarantine purposes of inbound travellers to Macau amid the city’s response to the Covid-19 emergency.

Macau’s unemployment rate, and the resulting social pressure, could potentially result in “instability” regarding the city’s security, said the Office of the Secretary for Security in... END_OF_DOCUMENT_TOKEN_TO_BE_REPLACED