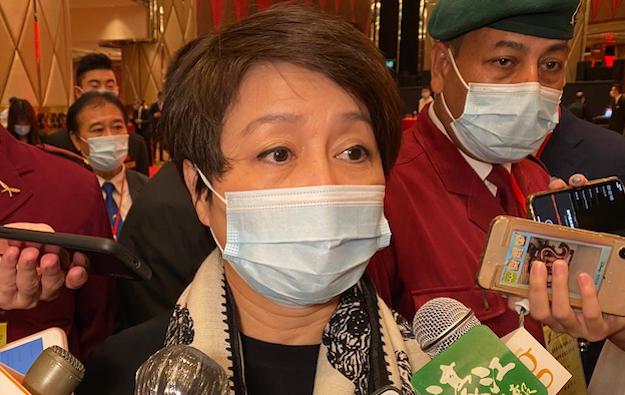 The comments of Angela Leong On Kei (pictured in a file photo), who is also a Macau legislator, came on the sidelines of a Legislative Assembly committee meeting.

The context was questions about the future of SJM Resorts’ junket business against the backdrop of the detention in Macau on November 27, of Alvin Chau Cheok Wa, founder of the Suncity Group brand of junkets, and the shuttering on December 1, of Macau operations for Suncity VIP rooms in casinos across the city.

It has also been reported that Macau casino operators are to cease collaboration with other junket brands. The Macau government mentioned in a Wednesday statement, jobs of staff working in junket-promoted VIP rooms in the city could not be affected by the suspension of such venues, as those workers were contractually linked to the casino operators.

None of Macau’s casino operators have so far publicly confirmed their intentions to suspend collaboration with junket firms.

“As of this moment, we have not made any agreements with the junkets’ VIP rooms” regarding ending collaboration, said Ms Leong, in comments aired by the Chinese-language television service of the city’s public broadcaster TDM.

This was “because the contractual relationships with them have not yet expired,” she noted.

Ms Leong added: “But when these relationships expire… we will discuss” whether there would still be collaboration with junkets. Based on the comments by Ms Leong as aired by TDM, no timeline was mentioned for when existing agreements with junkets were due to expire.

The SJM brand’s newest property, the HKD39-billion (US$5-billion) Grand Lisboa Palace casino resort, had a first-phase opening on July 30 with no VIP gaming as of that time.

The imminent return of package tours from mainland China will not only help boost Macau’s tourism businesses, but is also expected to help casinos gain more foot traffic in their mass gaming... END_OF_DOCUMENT_TOKEN_TO_BE_REPLACED