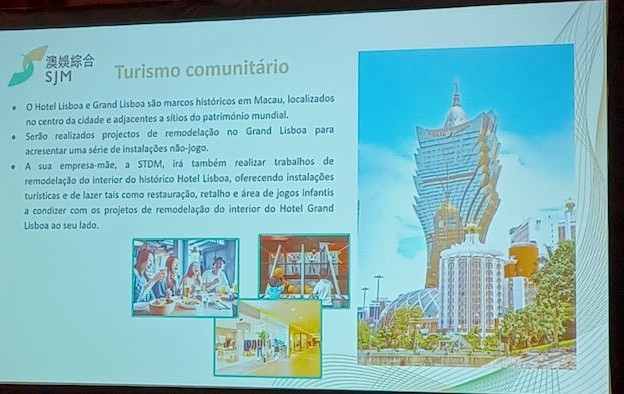 Macau-based casino operator SJM Holdings Ltd is planning a major revamp to its Lisboa Hotel, on the Macau peninsula and one of the most iconic properties in Asia’s gaming industry. The project is expected to be concluded by 2027 at the earliest.

In addition, SJM Holdings is also planning to renovate its Grand Lisboa casino-hotel, located across the road from Hotel Lisboa (properties pictured in company presentation), in order for Grand Lisboa to feature more non-gaming amenities. That project is to be completed by 2024 and is to be in use the following year.

The aggregate expected investment for the two projects is MOP2.50 billion (US$312.0 million). The company did not provide much detail on either project or on the facilities they would include.

Daisy Ho Chiu Fung, managing director of SJM Resorts Ltd, the entity holding the Macau gaming concession on behalf of SJM Holdings, gave the information on Saturday as part of a series of presentations by the six newly-reinstalled Macau concessionaires, who signed new contracts on Friday with the city’s government.

Hotel Lisboa dates back to 1970, during the early Macau gaming career of SJM Holdings’ founder Stanley Ho Hung Sun. His legacy company Sociedade de Turismo e Diversões de Macau SA had been awarded a 40-year monopoly in the Macau market in 1962. Ms Ho is a daughter of the late founder.

Under the latest 10-year concessions, due to start on January 1, the Macau operators have as a whole pledged to the government to spend in aggregate MOP108.7 billion on non-gaming and exploring overseas-customer markets. The SJM side has proposed a total investment of MOP14.03 billion, according to its concession contract, published in the city’s Official Gazette on Friday.

In a question-and-answer session with the media, Ms Ho said SJM Holdings had enough financial capacity to go ahead with the pledged investment. “In June. we completed our debt restructuring,” she said. “Our current financial status is stable and sound.”

Ms Ho also said she expected to see improvement in the overall number of tourist arrivals to Macau in 2023, following the easing of Covid-19-related travel restrictions in Macau. She said SJM Holdings’ operational performance would benefit from such increase in visitor numbers to Macau.

The group plans to create a pedestrian zone to host large-scale events, including ones related to food and drink.

The firm additionally plans to bring back its floating palace casino, another icon of the old Macau. It will be converted to accommodate shops, food and drink outlets and a museum-like facility. The company has also proposed to launch two other museums, including one dedicated to the history of the gaming industry in Macau.

The casino operator’s further plans include reviving the Macau Golf Open, as well as adding more restaurants to its existing operations, including at the Grand Lisboa Palace casino resort in Cotai.

International casino operator Las Vegas Sands Corp has been ranked as the most sustainable firm in the global casino sector, according to the 2023 edition of the S&P Global Sustainability... END_OF_DOCUMENT_TOKEN_TO_BE_REPLACED