A new chapter of Macau’s gaming industry – and of the city’s growth story – began 10 years ago, when the first Las Vegas-style casino opened for business.

Sands Macao was the first casino outside of Stanley Ho Hung Sun’s 40-year monopoly and the starting point of Las Vegas Sands Corp’s foray in Asia.

As the Macau government focused in diversifying the economy toward services such as tourism, May 18, 2004 marked the turning point for an industry that hasn’t stopped growing not only in Macau but also in Asia.

When the US$265 million casino opened its doors, thousands of people rushed into the gaming floors to put down their first bets. From that day on, Macau’s gaming industry would never be the same again.

“Sands Macao was a ‘game changer’ that served to wake-up the gaming industry of Macau,” says Grant Govertsen, Macau-based analyst at Union Gaming Research Macau Ltd. “It was the first to demonstrate the awesome potential of the Macau gaming market – both from a gross gaming revenue perspective and from an investment perspective,” he said.

Las Vegas Sands, controlled by Sheldon Adelson, earned back its investment in less than a year and helped transform Macau into the world’s largest casino destination.

“When it [Sands Macao] opened in 2004, it definitely represented a new epoch to the redevelopment of Macau’s gaming industry as a world-known casino gaming destination, especially the development of the mass market,” said Ricardo Siu Chi Sen, a gaming expert at the University of Macau.

“The entrance of established international integrated resort operators has been a major catalyst for the evolution of Macau as Asia’s first choice as an entertainment destination,” said Mr Govertsen.

After the announcement of the international companies that got a casino licence in Macau following the liberalisation process in 2002, “trademark effects did continuously stimulate new demand for Macau’s casino gaming,” says Mr Ricardo Siu.

Competition in the gaming industry in Macau also got fierce. There was even a very public tussle between Mr Adelson and former monopoly holder Mr Ho. But in the end, the cake was getting bigger and they all could have a share of it. One that was more profitable than ever before.

But some think there has been too much of a focus on gaming. “I think that we have focused so much on the gaming part that very little appears in the non-gaming sector, and this does not seem to fully reflect what has been expected from the gaming liberalisation,” said Carlos Siu Lam, associate professor of gaming at the Macao Polytechnic Institute. 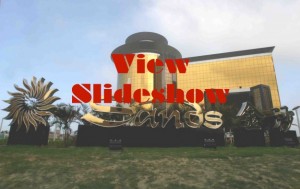 Existent gaming properties in 2004 were very different from what is the standard now. Sands Macao introduced a new concept in the market but it was also a trial and error process for the company.

Soon after it opened with a handful of hotel rooms and the longest buffet line in Macau, management understood that it had to tweak its strategy. Patrons sleeping around the property and taking advantage of substantial discounts at the buffet were not the kind of clientele the company was seeking.

Nonetheless, it set a new standard for the industry. “Each new resort set the bar even higher, which has forced all operators to innovate and, in general, improve their operating skills,” said Union Gaming’s Mr Govertsen.

“Cotai will raise the bar even higher,” he said, adding that there will always be a market for the casinos on the Macau peninsula.

Sands China Ltd, the Macau subsidiary of Las Vegas Sands, moved on to open the US$2.6 billion Venetian Macao in 2007, one of the most successful casino resorts in the city. But the company’s growth in Macau was not without its ups and downs.

Sands China had to go through a learning process to adapt to a new business culture. And it had its fair share of hiccups, struggling to get government authorisation to sell flats in the Four Seasons apartment hotel tower, and with officials rejecting the company’s application for additional land in Cotai on the sites known as parcels 7 and 8, although there was an agreement that Sands would be entitled to those plots.

Sands China is also entangled in a legal battle with former president and chief executive Steven Jacobs, who alleges he was wrongfully fired. Overall, the company became known by the high turnover levels among top-level executives: the latest to resign was chief operating officer David Sisk, who left the company last September.

Sands China has played a seminal role in bringing A-list entertainment and sport celebrities to Macau, helping to widen the city’s appeal as a tourism destination, as envisioned by Beijing. But ironically it had to shut down its Cirque du Soleil’s Zaia production at Venetian Macao in 2012, three and a half years into its 10-year contract, due to the poor attendance figures of the costly resident show.

The culture shock might have been greater than anticipated because of “the difference in corporate culture and legal practice between foreign firms in their home countries and Macau,” says Mr Ricardo Siu.

“I’m sure it isn’t easy for any foreign company to enter a new international market. Though Sands (as well as its competitors) have clearly figured out how to successfully operate here [Macau],” said Mr Govertsen.

Venetian Macao was the first property to open in Cotai, which is currently the centre of gaming in Macau, attracting millions of tourists every year.

In 2004, 16.7 million tourists visited Macau, a number that has grown to over 29 million visitors last year.

Yet, Macau is still forecast to gain more in terms of growth potential. “The industry as a whole may still be in its transition period from a traditional/regional structure to a modern/world-class structure,” says Mr Ricardo Siu.

That may still take a lot of effort. “There appears to be much to do to attract visitors from different jurisdictions [beyond Greater China] to make Macau a really regional (or international) gaming and recreation destination,” said Mr Carlos Siu.

One thing is certain: Macau has undergone a huge transformation over the last decade. Few could predict the growth it heralded since 2004. “We are confident … that there is likely to be much more than 10 years remaining with respect to the growth of demand for Macau on the part of mainland persons,” Mr Govertsen says.

Most of Macau’s casino operators are likely to generate positive free cash flow in the first quarter, given the robust recovery level of mass-market gross gaming revenue (GGR) in January, relative... END_OF_DOCUMENT_TOKEN_TO_BE_REPLACED