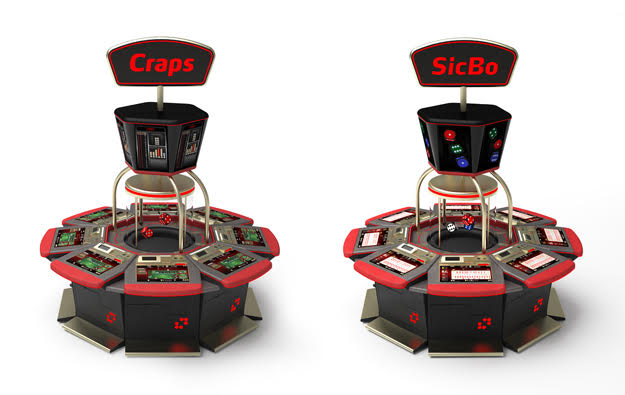 Five units of Spintec d.o.o.’s eight-seater Karma GEN2 electronic table game (ETG) product – in either craps, or sic bo and craps combined format – are now in use in the Macau casino market. The news was given in a Monday press release from Asia Pioneer Entertainment Holdings Ltd (APE).

APE has within the group a machine distribution business regionally that encompasses the Macau market and numbers Spintec, a Slovenia-based maker of ETGs for casinos, among its partner suppliers.

The latest unit of Karma GEN2 – installed in Studio City, a Cotai casino resort promoted by Melco Resorts and Entertainment Ltd – has a multi-game function, meaning it can offer sic bo and craps via the same machine. It has what APE described as an “extra-large screen,” as well as “cutting-edge LED lights” and padded armrests in a colour selected by the venue operator.

According to the release, Karma GEN2 Sic Bo/Craps is the only ETG product approved by the Macau regulator, the Gaming Inspection and Coordination Bureau – or DICJ – to integrate the play for the two separate dice games via a single set of dice.

This capability “allows players to freely switch the games which adds to the overall excitement on the casino floor,” stated APE’s press release on behalf of Spintec.

Of the other units in the Macau market, two multi-game versions and a craps-only version are already in a second Cotai resort, and a craps-only unit is in a third Macau resort. The identity of the latter two venues was not disclosed by APE.

The machines were providing a return “much higher than the operators expected,” said Vicky Chan, APE’s assistant general manager of sales and marketing, in prepared commentary in the announcement.

“We keep eye on the performance and look forward to more orders from other operators,” she added.

Spintec has been expanding its presence in the Asia-Pacific region, namely in Macau, South Korea, Vietnam and the Philippines, a company representative told GGRAsia in November.