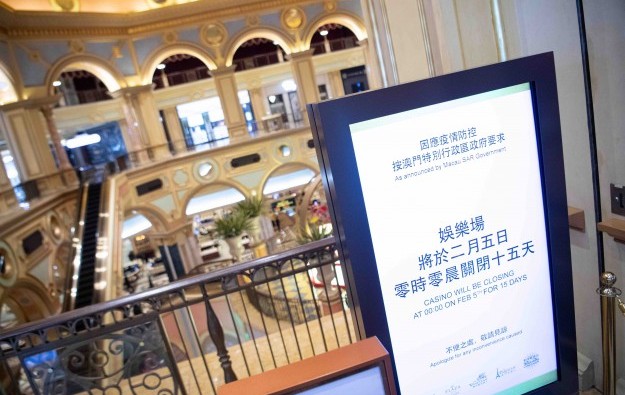 There is a “strong possibility” of an “extension of the shutdown order” that has temporarily been imposed on Macau casinos to try to stop local infection spread in the wake of the international coronavirus alert, said a Tuesday note from brokerage Sanford C. Bernstein Ltd.

But the institution conceded: “[Macau casino business] forecasts for the near term (i.e. first-half 2020) are largely guesses at this time, with the biggest variables being when casinos reopen, and even more importantly, when travel restrictions from China will be lifted.”

Sanford Bernstein gave no detail on why it considered there was a “strong possibility” the casino closure move would be extended. It also did not give any pointers as to how long any such extension of the shutdown might last.

The 15-day closure is due currently to run until February 19 inclusive. Macau government officials speaking on Monday at a daily media briefing, were non-committal on whether the shutout might last longer.

Even before the shutdown from midnight on February 4, Macau’s casino gambling business had slowed, coinciding with a freeze on new individual-traveller permits for mainland residents to visit Macau, and a ban by the central government on all outbound tour groups.

“For Macau, the near term looks bleak,” after “GGR collapsed beginning from Chinese New Year on the back of the Wuhan coronavirus crisis,” said the Sanford Bernstein analysts.

Although they added: “…we see a solid recovery in place in the second half, followed by a strong 2021”.

As of Tuesday afternoon,  there were 10 confirmed cases of coronavirus infection in Macau. The tally included three locals with no history of recent travel to the mainland’s Hubei province – the epicentre of the outbreak – and one female tourist from Wuhan in Hubei who left Macau last week after two weeks of successful hospital treatment in isolation.

Lei Wai Seng, clinical director of Conde S. Januário Hospital, a public facility where the Macau cases have been treated, said at a Tuesday Macau government briefing on the local crisis that 103 drivers of casino shuttle buses were being screened for the virus, due to them forming a “high-risk” group. Mr Lei said the results of the tests should be known in 24 hours. One of the locals so-far diagnosed was a driver on a shuttle serving several SJM Holdings Ltd casinos in downtown Macau.

Lam Chong, director of Macau’s Center for Disease Prevention and Control, a body under the city’s Health Bureau, noted a recently-confirmed case in Hong Kong involving a Macau casino shuttle driver dealing with tourists. It emerged that the person had Hong Kong and Macau residency, was working on contract as a driver, and is now being treated in Hong Kong, and therefore had not been counted as “local” in the Macau figures so far.

Tuesday’s Macau government briefing on the coronavirus alert at local level also heard that a Malaysian man that was diagnosed in his country as positive for the coronavirus, had been working at City of Dreams Macau, a property promoted by Melco Resorts and Entertainment Ltd, and had commonly visited Zhuhai.

The Macau authorities said on Tuesday that 31 coronavirus cases involving patients diagnosed outside Macau, were individuals with a record of either working in or travelling to Macau.