Studio City in Macau to add W Hotel by December 2022 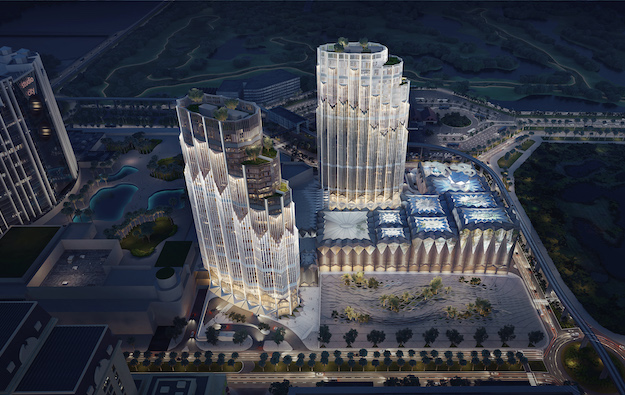 Melco Resorts and Entertainment Ltd announced on Wednesday that Phase 2 of its majority-owned Studio City casino resort on Cotai would have Macau’s first W Hotel (pictured in an artist’s rendering).

The casino firm said it had a strategic partnership with the hotel brand’s owner, Marriott International, to open the W Hotel in December 2022, along with the rest of Phase 2 of the Studio City property.

Until now, Studio City has had two self-branded hotel towers.

The new accommodation will be known as “W Macau – Studio City” and is due to have 557 guest rooms, including 127 suites and a spa, a gymnasium and an indoor swimming pool. The new hotel will also offer a total of 1,100 square metres (11,840 sq. feet) of event and meeting space.

Henry Lee, president for Greater China at Marriott International, was cited in the release as saying that Macau’s “supercharged energy and unique identity as an entertainment hub, together with its mix of Eastern and Western culture,” made the city a “natural fit for W Hotels.”

At a topping out ceremony in November for Phase 2, Mr Sisk had said that while the resort’s extension would be largely focused on non-gaming, the gaming part would cater to “premium” patrons.

Most of Macau’s casino operators are likely to generate positive free cash flow in the first quarter, given the robust recovery level of mass-market gross gaming revenue (GGR) in January, relative... END_OF_DOCUMENT_TOKEN_TO_BE_REPLACED