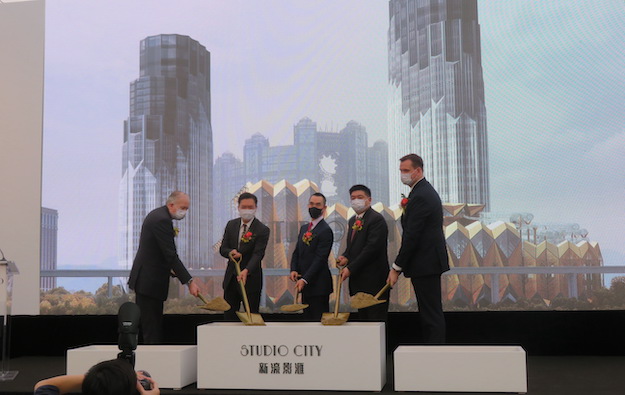 The firm was applying to the Macau government to have gaming there, he added.

The aim in Phase 2 was to “create a… better environment” for “some of our premium players,” Mr Sisk said, in response to a question from GGRAsia. He was speaking at a topping out ceremony on Monday for Phase 2.

At the occasion, Lawrence Ho Yau Lung (pictured, third from left), chairman and chief executive of Melco Resorts, said in prepared remarks, that “99 percent” of the US$1.3 billion being invested in Phase 2 was for non-gaming amenities.

The new phase fulfils a long-standing company pledge to the Macau government as part of Studio City’s land concession, although the venue promoter has several times been given extensions on the deadline to complete the work.

Phase 2 – which will have a multi-screen cinema, an indoor water park set to be “one of the largest in Asia”, and a new indoor play area for children – showed Melco Resorts was committed to go an “extra mile” with non-gaming amenities said Mr Ho in his remarks. He did not attend the media question-and-answer session that followed.

Mr Sisk said during that session, that Melco Resorts was also investing in bringing new non-gaming offers to Phase 1 of Studio City. Phase 1 has had a number of attractions open and close since the Hollywood-themed property’s launch in October 2015.

“If you look at our Beverly Project [at Studio City Phase 1] we are spending over US$30 million to…bring in a new set of restaurants, entertainment, there as well as a collection of retailers that we have not necessarily seen in Macau before,” said Mr Sisk. He added the company would also be launching at Studio City a series of residency shows featuring several Hong Kong performing artists.

Studio City Phase 2 is due for completion “before December 27, 2022”, according to information released for Monday’s ceremony, i.e., after Melco Resorts’ current Macau concession expires in June that year.

“We hope that we will see you again for our grand opening [of Studio City Phase 2] in December next year,” said Mr Ho in his address.

Phase 2 is by Zaha Hadid Architects, the firm that had designed Morpheus, the fifth hotel tower at Melco Resorts’ Cotai flagship property, City of Dreams Macau . 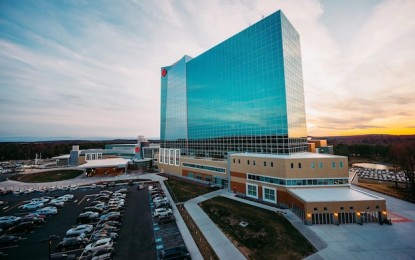