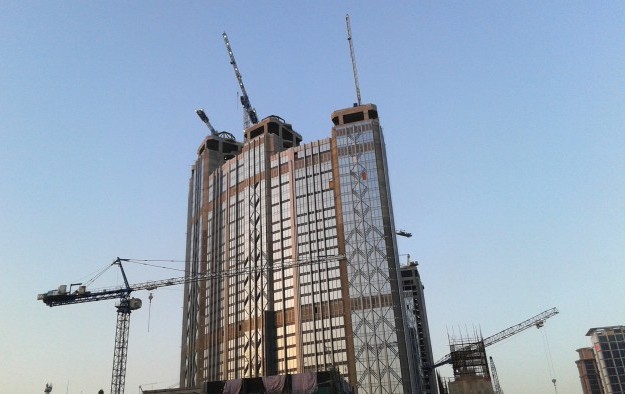 Casino developer Melco Crown Entertainment Ltd says it might technically fall into default on an approximately HKD10.86-billion (US$1.4-billion) Studio City project loan if it is unable to open to the public its majority-owned Cotai casino resort (pictured under construction) by October 2016 “with a minimum 400 gaming tables available for operation”.

“In the event that we are unable to meet these conditions, it may constitute an event of default under the Studio City Project Facility,” stated the firm in its 2014 annual report filed with Nasdaq on Wednesday.

“Any such event of default could cause all amounts outstanding with respect to the Studio City Project Facility to become due and payable immediately and entitle the lenders to take enforcement actions,” it added.

According to the filing, the project facility is syndicated among a number of banks. The filing doesn’t specify if any one bank in the loan syndicate has the power to call a default.

On January 12, Lawrence Ho Yau Lung, co-chairman and chief executive of Melco Crown, said at a press event to publicise the attractions planned for the US$3.2-billion Studio City that he had “no idea” how many gaming tables the Macau government would give the property at its opening.

He added the firm “hoped” to get as many as 400 early in the resort’s operation. Table allocation is controlled by the Macau government. There is currently a 3 percent cap on annual compound growth in the number of gaming tables in the Macau market – affirmed on Tuesday by the Macau government. The administration has also said it is linking table allocation for new projects to the type and amount of non-gaming facilities they provide.

In January Mr Ho said Studio City was likely to open in “mid-year”. Subsequently that timetable has been adjusted in company announcements to the “third quarter”.

According to the annual report, the Studio City Project Facility refers to a senior secured project facility, dated January 28, 2013, entered into between, among others, Studio City Co Ltd as borrower and certain subsidiaries as guarantors for a total of HK$10,855,880,000. It consists of a delayed draw term loan facility and a revolving credit facility.

On July 28, 2014, Melco Crown drew down the entire delayed draw term loan facility under the Studio City Project Facility according to the filing.

On Tuesday, the Macau government said it had not yet decided on the number of new live gaming tables it will grant casino operator Galaxy Entertainment Group Ltd for the upcoming second phase launch of the group’s flagship Galaxy Macau Cotai property. The official launch date is in 40 days, on May 27.

Galaxy Entertainment has said in previous public statements that Galaxy Macau Phase 2 has capacity for 500 tables and 1,000 slot machines.