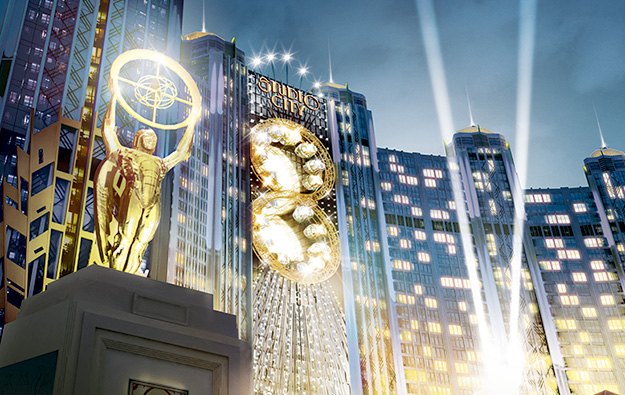 Analysts Carlo Santarelli and Danny Valoy added in a note released on Friday that the property, located on Cotai, is expected to open in “the final week of October”.

Melco Crown had initially scheduled a press conference for this Monday to announce the opening date for Studio City. But the media event was delayed until Wednesday.

Studio City is 60-percent owned by Melco Crown. No public announcement has been made so far on how many new-to-market gaming tables the Macau government will grant to the property.

In January, Lawrence Ho Yau Lung, co-chairman and chief executive of Melco Crown, said at a press event to publicise the attractions planned for Studio City that he had “no idea” how many gaming tables the Macau government would give the property at its opening. He added the firm “hoped” to get as many as 400 early in the resort’s operation.

“Checks suggest Studio City may receive roughly 150 tables,” Mr Santarelli and Mr Valoy wrote in a note, pointing out that would be similar to the number of new units granted by the Macau government to rival operator Galaxy Entertainment Group Ltd, when that firm in May opened the second phase of casino resort Galaxy Macau, also on Cotai.

The analysts added: “While not necessarily a big surprise, we do believe the prevailing view was that 150 would be the minimum for the new ‘free-standing’ openings post the 150-table allocation to Galaxy at its phase two opening. Thus, if 150 tables proves accurate, for those who believe table capacity is an issue in the market, a group whom we are not amongst, the result could be disappointing.”

The Deutsche Bank team estimated Studio City might use 110 of the new tables for mass play and 40 for premium mass and “direct VIP”, a reference to VIP players directly managed by the house, rather than brought in by junkets. In addition, the gaming floor is expected to open with 1,000 slots and 200 live dealer multi-terminal stations, Mr Santarelli and Mr Valoy stated.

The allocation of new-to-market gaming tables in Macau is subject to a cap system. This scheme, effective since 2013, is designed to limit compound annual growth in the number of new live gaming tables to three percent until December 2022 – from a base of 5,485 tables as recorded by the local casino regulator at the end of the fourth quarter 2012.

At the end of last year, there were a total of 5,711 licensed tables in Macau. The figure rose to 5,814 at the end of the second quarter of 2015 (post-Galaxy Macau Phase 2’s opening), according to official data from the city’s gaming regulator, the Gaming Inspection and Coordination Bureau.

Deutsche Bank’s Friday note added that based on “recent checks”, the opening of Studio City is likely to take place “in the final week of October”.

Mr Santarelli and Mr Valoy said: “While Melco Crown had previously stated a late third-quarter opening, we believe few expected this timeline to remain firm and hence we don’t expect the late October opening to come as a surprise. Given what has been more muted seasonality during holiday periods, we don’t believe the property opening after the Golden Week period (first week of October) is material.”

Most of Macau’s casino operators are likely to generate positive free cash flow in the first quarter, given the robust recovery level of mass-market gross gaming revenue (GGR) in January, relative... END_OF_DOCUMENT_TOKEN_TO_BE_REPLACED