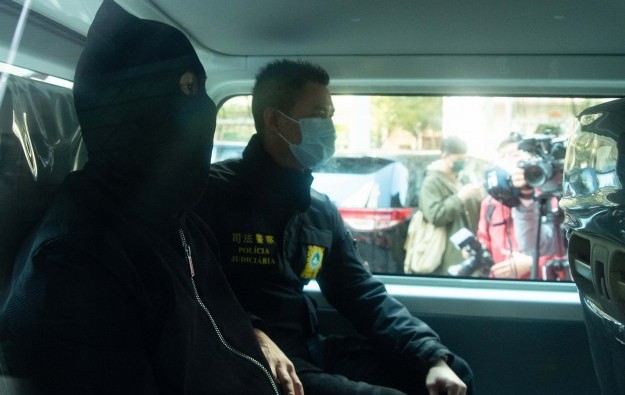 Levo Chan Weng Lin (pictured left, on Sunday), boss of Macau casino junket brand Tak Chun, has been placed in custody and transferred to the Correctional Services Bureau’s prison facility at Coloane in Macau, said Macau’s public broadcaster TDM and other news outlets, citing sources they did not identify.

The Tak Chun boss, referred to by the Judiciary Police only as a suspect named Chan, was detained by police in the city on Friday, on suspicion of illicit gambling activities, formation of a criminal syndicate and money laundering, according to a Sunday press conference by the police.

Another suspect named Choi, also detained in connection with the inquiry, has been released on bail, according to a statement by a company he heads.

The latter firm said in a Sunday filing that is was “aware of the arrest and detainment of Mr Chan Weng Lin,” its CEO and controlling shareholder, by the Macau Judiciary Police.

Macau Legend oversees a number of Macau casinos under the licence of SJM Holdings Ltd, and several hotels and leisure facilities at Macau Fisherman’s Wharf.

Macau Legend said in its Sunday filing: “As the group is operated by a team of management personnel and the above incident relates to the personal affairs of Mr Chan and [is] not related to the group, the board does not expect the above incident to have a material adverse impact” on its daily operations.

Macau’s casino junket sector has been in the spotlight since the detention in November of Alvin Chau Cheok Wa, and the suspension of operations at his Suncity Group, a junket brand described previously by investment analysts as the largest VIP operator in the city. According to the Macau police, this latest case is linked to Mr Chau’s, but the local authorities did not provide further details.

Regarding the suspect referred to as Choi, also detained on Friday in the latest case, there was a separate filing on Monday to the Hong Kong bourse from Ying Hai Group Holdings Co Ltd.

According to its other corporate materials, the firm is involved in sale and distribution of air tickets and hotel rooms, sale and provision of “ancillary travel-related products”, the sponsorship of song concerts in Macau, and vehicle-leasing and limousine services in that city.

The company said it was aware that “recent news reports stated on 28 January 2022, Mr Choi Wai Chan, an executive director, chairman of the board, the chief executive officer and a controlling shareholder of the company, was arrested by the judicial police of Macau.”

The filing added: “The board would clarify that Mr Choi has been released on bail.”

The announcement further noted that based on “information currently available,” the board considered that what the filing termed the “incident” would not affect Mr Choi’s suitability as director of the company, and he would “continue to perform” his duties.

The company added that “so far as the board is aware” no other official or employee of the group was under “similar investigation”.

The statement added: “The board would like to clarify that the group did not engage in gambling business of any kind as at the date of this announcement and there is no plan” to do so.

The filing further said: “The board is not aware of any other information which indicates that the group is or may be related to any illegal activities.”