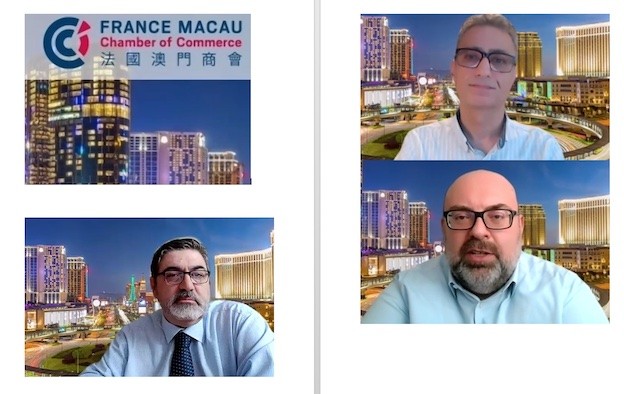 “There will not be a new operator. Where are they going to build?” said Alidad Tash (pictured, upper right), formerly a senior Macau casino executive and now managing director of gaming management consultancy 2NT8 Ltd.

“I don’t think parcels seven and eight are going to be given to anybody” in the casino industry, said Mr Tash, referring to land in the Cotai district, an area where most of Macau’s newest casino resorts are located.

Also, “you have a 10-year concession… it’s going to cost you three or four years, just to build” a resort. “Who’s going to go ahead and spend US$5 billion or US$6 billion, and only get six or seven years of guaranteed continued life?” he asked

“As far as we know, 10 years from now,” such a new concession “could all be taken away,” added Mr Tash.

The event was presented by France Macau Chamber of Commerce and co-organised by local publication Macau Business.

Mr Oliveira had a central role as a Macau government official at the time of the city’s public tender process more than 20 years ago that saw an end to the monopoly era of Stanley Ho Hung Sun.

Mr Umansky said it was spelled out under the terms of the new tender that a maximum of six new concessions would be permitted, and “there are six operators” currently.

“I find it very implausible that one of the six is not going to get a concession. Will there be other bidders? I don’t know,” said Mr Umansky. Though he added that in his view, “no one else,” other than the incumbents, “is going to win”.

Big outsider an outside chance

Mr Oliveira stated he “did not exclude the possibility that an already-existing large [casino] group, that has had an interest in having a footprint in Macau, may want to come to the tender”. He mentioned Malaysia’s Genting group, but purely as a theoretical participant in the tender.

The panellists were asked whether a bidder might emerge that was linked to a Chinese state-owned enterprise.

Mr Oliveira said that in his view, in terms of mainland China law, “no Chinese mainland group can come to the tender”.

He added that he was surprised that the Macau tender had gone ahead now, due to what he termed the “uncertainties” surrounding the industry and the city, most notably the Covid-19 pandemic and China’s ‘zero-Covid’ policy that has produced a stop-start environment for the Macau casino sector. The terms of the existing concession system allowed for up to five years of extension in increments.

But he noted that the idea promoted by the Macau government of boosting, during the life of the upcoming new tenders, the number of foreign VIP gamblers in the market – including via means of relief on up to 5 percentage points of the tax on their gross gaming revenue (GGR) – should not be dismissed out of hand, because it had “never been tried”. The city had relied instead, on the easier pickings of high rollers from mainland China: a market currently riven with uncertainty.

“I understand that it is not wise to create a model based on replacing the gamblers,” and leisure customers “that came from mainland China… with customers that come from other jurisdictions.”

But it could nonetheless be a “positive thing” in the new tender process. “If you put pressure enough on the concessionaires, they will find junkets within the same segment of customers,” but from Asian markets outside China, suggested Mr Oliveira.