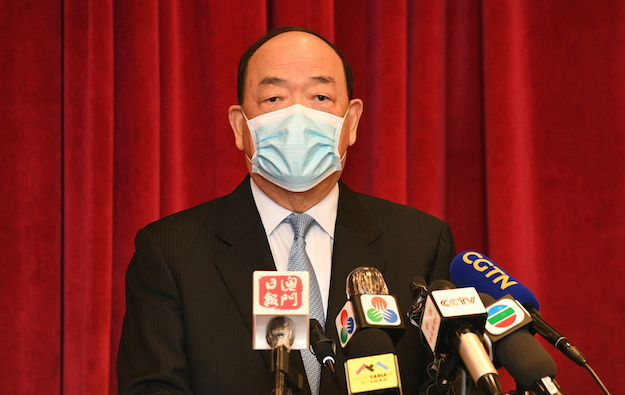 Macau’s Chief Executive, Ho Iat Seng (pictured), has said the government expects casino gross gaming revenue (GGR) for 2022 to be about MOP130 billion (US$16.2 billion) if there are no local cases of Covid-19. He was speaking to reporters on Friday, after returning from a duty visit to Beijing.

Mr Ho said casino GGR for 2021 would have been close to that figure, had the city not experienced Covid-19 outbreaks respectively in August, September, and October. Aggregate casino GGR in the first 11 months of 2021 stood at MOP78.90 billion, still an increase of 49.9 percent from the prior-year period.

The outlook for 2022 was still unclear in terms of pandemic-related developments: should there be any local cases, next year’s GGR might not meet the government’s expectation, he said.

The MOP130-billion figure had been mentioned in November in the fiscal budget plan for the coming year. The amount is under half the MOP292.5 billion Macau achieved in full-year 2019, prior to the advent of the pandemic.

“As the impact of the novel coronavirus… continues, the economic conditions for the Macau SAR are expected to remain challenging in 2022 and a recovery from it will take time,” the government stated in the budget document.

In the budget plan, the government estimated gaming tax income – the biggest source of the city’s fiscal income – to reach MOP45.5 billion in 2022.

In his Friday remarks, Mr Ho also talked about the development of the city’s junket sector. He stated that the government had no role in relation to the cooperation arrangements between casino firms and junket promoters.

Macau’s casino junket sector has been in the spotlight since the detention in Macau of Alvin Chau Cheok Wa, and the shutdown of his junket brand, privately-held Suncity Group, described previously by investment analysts as the largest VIP operator in the city.

Following the closure of all Suncity Group VIP rooms in Macau on December 1, it was reported that a number of the city’s casino concessionaires were to cease collaboration with other junket brands. So far, only one of the city’s casino firms, Wynn Macau Ltd, has confirmed such intention.

Macau’s top official noted that junkets were not a mandatory element of either the concession or sub-concession contracts. Over the past five years, the gaming-promoter sector had seen its business shrinking, he said, adding that the government had not evaluated the impact of the suspension of operations of the city’s junkets.

Macau is likely to have a shortfall in its annual gaming tax income, relative to the levels of public spending to which it usually has been pledged, if junket-based VIP gambling no longer makes a significant contribution to the city’s coffers, suggest several local scholars in comments to GGRAsia.

Most of Macau’s casino operators are likely to generate positive free cash flow in the first quarter, given the robust recovery level of mass-market gross gaming revenue (GGR) in January, relative... END_OF_DOCUMENT_TOKEN_TO_BE_REPLACED