Weekend visitor volume to Macau surges even before CNY 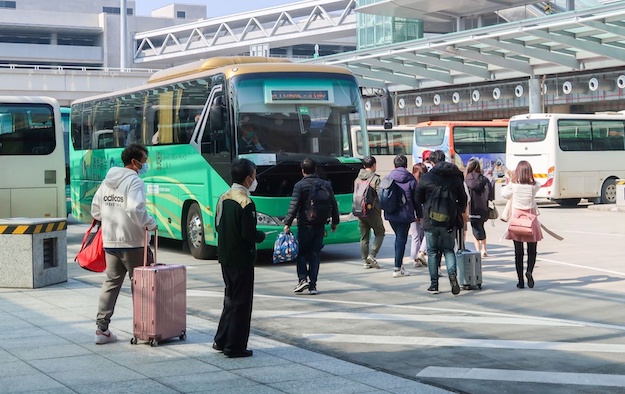 An average of just over 51,000 visitors came to Macau daily between the beginning of Friday and the end of Sunday, according to data from the Macau government.

The upturn came even before the Chinese New Year (CNY) break, which this year runs from January 21 to January 27 on the Chinese mainland. In pre-pandemic times the festival has been a period of high demand for Macau’s casino and tourism industries, though the period immediately before the holiday was typically quieter.

According to a survey by GGRAsia, available room capacity at many Cotai casino-resort hotels had already been sold out by last week, for most days of the upcoming Chinese New Year.

For the Friday to Sunday arrivals in the past weekend period, around half – i.e., 72,672 – of the 153,079 tally, travelled via the Border Gate linking Macau to Zhuhai in the neighbouring Chinese mainland province of Guangdong. Nearly 12 percent of the aggregate arrivals – i.e., 18,083 – journeyed by road via the Hong Kong-Zhuhai-Macau Bridge.

Macau recorded on Saturday its highest daily total of visitor arrivals – at 55,845 – since a local Covid-19 outbreak in mid-June last year, showed the data.

Maria Helena de Senna Fernandes, director of the Macao Government Tourism Office (MGTO), said on Sunday on the sidelines of a public event in the city – in comments aired by public broadcaster TDM – that in the coming days Macau “won’t have 55,000 visitors every day, but we are still expecting an average of 47,000”, with the daily tally possibly peaking at 60,000 during Chinese New Year.

MGTO said in a Sunday release that it had that day welcomed to Macau circa 40 Hong Kong tourism industry leaders for a two-day “familiarisation trip”.

The party’s itinerary was to include tourist attractions that form Macau’s World Heritage Site, and tourism facilities at various casino resorts. The delegation members were also due to participate in a “travel trade networking seminar” with their industry counterparts in Macau for an update on the city’s tourism outlook, said the bureau.

Macau’s tourism boss had mentioned in her Sunday remarks, that there were still bottlenecks in terms of available transport capacity to the city.

Ferry services between the Outer Harbour Ferry Terminal on Macau peninsula and the Hong Kong-Macau Ferry Terminal in Sheung Wan, in Hong Kong’s Central district, are set to restart on Thursday this week (January 19). In a first phase, 10 round trips per day in aggregate will be available.

The ramping up of transport capacity between the two places – after three years of Covid-19 related restrictions – has been mentioned by commentators as an important step for recovery of Macau’s tourism and casino markets.

A number of investment analysts has said that circa 15 percent of Macau’s annual casino gross gambling revenue (GGR) had been contributed by visitors from neighbouring Hong Kong in pre-pandemic times. Many visitors from Hong Kong have in the past been day trippers, with night sailings an element in such business.

A limited number of passenger ferry services between Macau and Hong Kong had only resumed on January 8. It had added services would be built up again in stages.

Some Macau casinos visited by GGRAsia on Thursday, actually had tables that were closed, notwithstanding strong consumer demand during Chinese New Year (CNY). The reasons for some tables being... END_OF_DOCUMENT_TOKEN_TO_BE_REPLACED