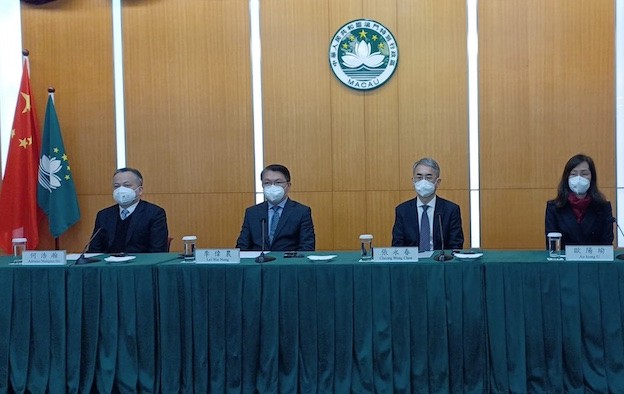 The information was given by André Cheong Weng Chon (pictured second right), Secretary for Administration and Justice, during a Friday press conference following the signing of the new concession contracts.

The gaming venue to remain under Galaxy Entertainment’s rights is Casino Waldo in downtown Macau. The one using Melco Resorts’ gaming rights is Casino Grand Dragon in Taipa. The information is based on the content of the new concession contracts published on Friday night.

Satellites operate under the gaming licence of a Macau concessionaire, but are usually promoted by third parties. Under Macau’s revised gaming law – approved by the city’s Legislative Assembly in June - satellite venues have three years to transition to a management-company arrangement, where such an entity will not be allowed to share gaming revenue, but only have a management fee from a concessionaire.

Seven existing SJM Holdings satellites not mentioned in SJM Holdings’ new concession contract – and therefore anticipated to be ceasing gaming from January 1 – include Casino Taipa, located inside the Regency Art Hotel, in the Taipa district, but which had been in suspension for some time.

The latter three were all founded by Macau businessman Chan Meng Kam; with Taipa’s Casino Grand Dragon also founded by the entrepreneur, confirmed as remaining in the mix as mentioned, under Melco Resorts’ licence.

On Friday, Secretary Cheong said in the press conference that how many of the remaining satellites would want to transition into a situation where they were run by management companies, would be a commercial decision, related to market conditions.

The official also mentioned that the government would not disclose publicly the scoring of the six successful concession applicants under the public tender process.

The other Macau government officials taking part in Friday’s press conference were fellow members of the committee for the gaming concessions public tender, the body that assessed the applications under the recent tender process.

Another press conference is scheduled for Saturday, to be attended by representatives of the concessionaires and Secretary Lei and Secretary Cheong.

International casino operator Las Vegas Sands Corp has been ranked as the most sustainable firm in the global casino sector, according to the 2023 edition of the S&P Global Sustainability... END_OF_DOCUMENT_TOKEN_TO_BE_REPLACED