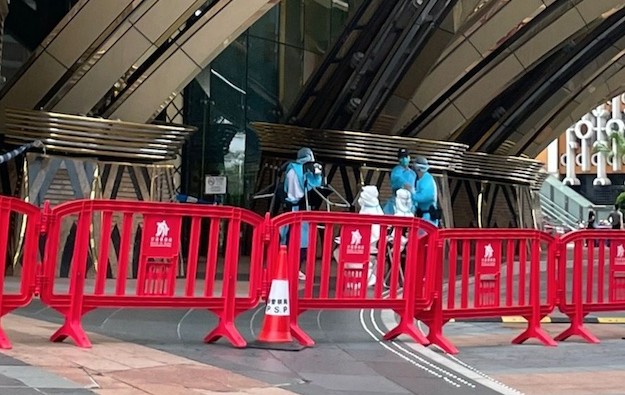 More than 500 people are still inside the Grand Lisboa casino hotel after the complex was locked down on Tuesday by the local authorities, said an official during a Wednesday afternoon briefing on Macau’s ongoing Covid-19 outbreak.

The information was given by Liz Lam Tong Hou of the Macao Government Tourism Office, at the press conference of the Novel Coronavirus Response and Coordination Centre.

All the people are said to be either staff, hotel guests, or tenants.

The update also revealed that the One Central shopping mall in downtown Macau had been temporarily closed from 3pm on Wednesday, after six people associated with the facility had tested ‘positive’ for Covid-19.

One Central adjoins the MGM Macau casino resort run by MGM China Holdings Ltd, but the latter property is not affected by the closure.

As of midnight on Tuesday, Covid-19 cases in the latest outbreak that began on June 19, had risen to 1,087, with 146 cases in the preceding 24 hours. Wednesday’s briefing said between midnight and 4pm on Wednesday, an additional 81 cases had been identified, taking the total to 1,168.

On Tuesday, the authorities had said a “cluster” of 13 Covid-19 infections among people linked to Grand Lisboa, a property of SJM Holdings Ltd, had been identified.

The property had later that day been added to the list of ‘red’ zones in Macau, meaning people cannot leave the designated building or other location, as a Covid-19 countermeasure.

A statement from the city’s health authorities said the property could only reopen on July 11 at the earliest, once it had been downgraded to ‘yellow’ status.

At Wednesday’s press conference of the local Covid-19 task force, Leong Iek Hou, a senior Health Bureau official, said that prior to Grand Lisboa being cordoned off and locked down, gamblers were permitted to leave the premises.

Ms Leong said this was on the basis that the people concerned didn’t have close contact with the venue’s staff, and most of those identified in the Grand Lisboa infection cluster were staff.

She didn’t clarify how many gambling customers were permitted to leave prior to lockdown.

In a Wednesday statement, SJM said that “proper care has been extended to all affected employees, guests and tenants” at Grand Lisboa, including the provision of “accommodation and three daily meals.”

“Grand Lisboa also arranges orderly delivery of essentials to those affected as sent by families and friends in accordance with the government precautionary guidelines,” it added. “The government has arranged for disinfection and cleaning of the premises.”

SJM said additionally that Grand Lisboa would “continue to implement strict containment measures, as the health and safety of all guests and employees represent its top priorities.”

Wednesday’s government briefing also confirmed that the second floor and the mezzanine level of the Shoppes at Four Seasons, a shopping mall in a Sands China Ltd property on Cotai, had to be closed.

On Monday, the Health Bureau had issued a statement to the media saying “at least 40 people” associated with the first floor of the Shoppes at Four Seasons had been found to be infected with Covid-19.