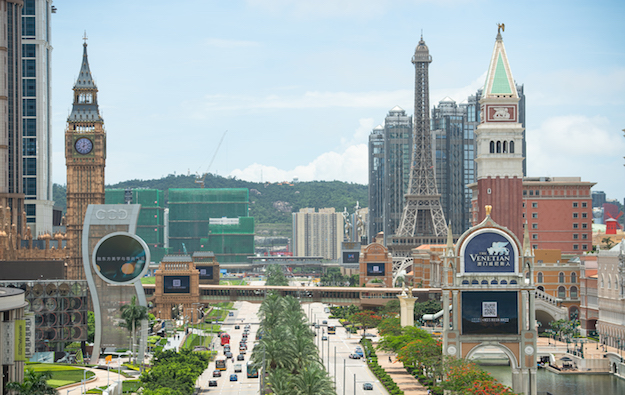 Deutsche Bank Securities Inc expects the year-on-year rate of decline in the fourth quarter for Macau’s casino gross gaming revenue (GGR) to moderate to 24.8 percent, at the equivalent of just under US$1.80 billion, compared to the 70.4 percent year-on-year contraction in the third quarter. Were the bank’s forecast to come to reality, it would mean fourth-quarter year-on-year GGR decline stablising to the same percentage rate as in the first three months of this year.

In the three months to September 30, Macau GGR was the equivalent of circa US$694.5 million, according to Deutsche Bank, based on official data released on Saturday. The third quarter performance coincided with the city’s casinos being closed for a 12-day period after a local Covid-19 outbreak.

The latest information on the outlook for the fourth quarter – in a Saturday note from Deutsche Bank analyst Carlo Santarelli – came a week after the Macau government said China’s central authorities would from late October or early November restart group tours to Macau, and recommence online issuance of exit visas for individual travellers from the mainland to come to the city.

Deutsche Bank expects Macau’s fourth-quarter mass-market GGR to be just under US$1.43 billion, which would be down 19.5 percent year-on-year; and VIP GGR to be US$368.0 million, down 40.0 percent from the prior-year quarter.

Mr Santarelli noted that while the circa US$371 million achieved in September GGR had been a 49.6 percent year-on-year contraction, it still represented a 35.3 percent sequential improvement – equal to “+39.8 percent per day”, compared to August.

Nonetheless, “the GGR result for September represents an 86.6 percent shortfall, relative to the GGR achieved in September of 2019,” observed the analyst, referring to the most recent trading year prior to the Covid-19 pandemic.

JP Morgan Securities (Asia Pacific) Ltd said in a Saturday note after the Macau September data, that consumer demand during the period had been “as weak as expected”, but that it “probably doesn’t matter”.

“All eyes are on what’ll happen after the resumption of e-IVS and group tours, as widely publicised,” stated analysts DS Kim and Livy Lyu, referring first to one form of exit visa for independent travel out of the mainland, under the Individual Visit Scheme (IVS).

Referring to the ongoing public tender for new Macau gaming concessions, which had a submission deadline on September 14, the JP Morgan team stated: “We see the successful renewal of gaming concessions (e.g., six provisional winners, might be announced as early as end-October).”

The analysts added they thought a “meaningful rebound in December GGR will serve as key positive catalysts near-term, before genuine and sustainable profit/cash flow recovery kicks in during 2023.”

The decision by the Macau government to grant fresh 10-year licences to each of the city’s six incumbent casino operators has been welcome by top management at those firms. Each of the concessions... END_OF_DOCUMENT_TOKEN_TO_BE_REPLACED