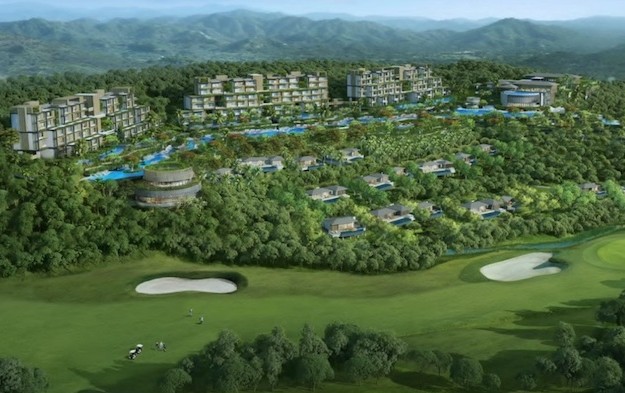 A golf course from a design firm founded by retired champion Jack Nicklaus, and to be located at a Philippine luxury development called Hann Reserve, is the first thing due to be completed on-site, in 2025, said the overall project’s promoter in response to a GGRAsia enquiry.

The hilltop links by Florida, United States-based Nicklaus Design, will be one of three 18-hole courses to be built at Hann Reserve at New Clark City. The others are to be designed by former world number one-ranked golfer Nick Faldo, and South Korean professional golfer KJ Choi.

The whole multi-phase development (pictured in an artists’s rendering) is due to have several upmarket hotels, villas, and “residences”, according to a press release that had been sent to GGRAsia on Monday.

The scheme is being promoted by Hann Development Corp, whose chairman and chief executive Han Daesik is also boss of Hann Philippines Inc, a firm which promotes the nearby Hann Casino and Resort at Clark Freeport.

Mr Han told GGRAsia at the time Hann Casino and Resort launched in December 2021 as an upgrade and rebranding from the former Widus Hotel and Casino, that the ability to offer high-end casino customers golf facilities nearby was a key element in the business plan.

A linked entity called Hann Resorts confirmed to GGRAsia in reply to our Monday enquiry, that the “initial ballpark figure” for the cost of Hann Reserve’s Phase 1 and Phase 2 was US$800 million.

Phase 1 will be the Nicklaus Design golf course due in 2025, and a hotel under the Accor SA brand Banyan Tree, due in 2026. Phase 2 will be a valley-based links by KJ Choi, and a 200-key hotel under Accor’s Angsana brand.

“The final phase will be Nick Faldo’s river course, luxury residences and condominiums,” as well as two Marriott International accommodation brands – The Luxury Collection and The Westin –, plus Accor’s Sofitel and Emblems Collection,” said the reply. The latter two brands were previously planned to be housed in Hann Lux, a new development close to the existing Hann Casino and Resort, but “will now be relocated to Hann Reserve”

The decision by the Macau government to grant fresh 10-year licences to each of the city’s six incumbent casino operators has been welcome by top management at those firms. Each of the concessions... END_OF_DOCUMENT_TOKEN_TO_BE_REPLACED