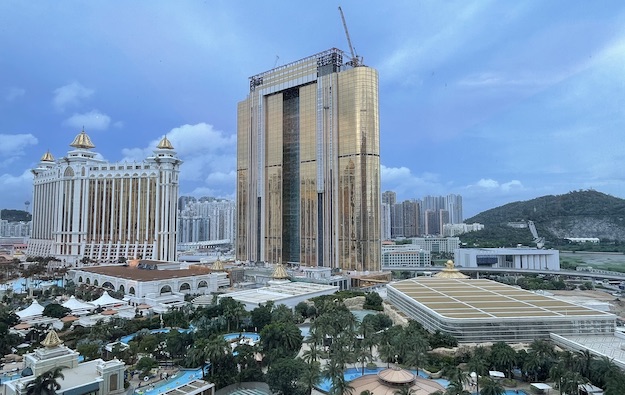 The promoter of the Galaxy Macau casino resort has again altered its language regarding a possible opening date for elements in Phase 3 of the property, to the “end of this year or early next year,” compared to “early 2022″ as mentioned in August. But bosses at Galaxy Entertainment Group Ltd pointed out it was difficult to give a firm timetable under current market conditions.

Lui Che Woo, group founder and chairman, said regarding Phase 3, in comments during the online press conference to discuss the firm’s fourth-quarter and full-year earnings on Wednesday: “We hope to be able to open for business by the end of this year, but whether it is going to be the end of this year or early next year we will let you know in due course.”

He added. understood to be a reference to ongoing travel disruption for tourists inbound to Macau, amid the Covid-19 pandemic: “There are things that are not in our control”.

In August, the company had said that Raffles (pictured centre, in a file photo), a hotel within Phase 3, might open in “early 2022”.

The group’s vice chairman, Francis Lui Yiu Tung, noted during Wednesday’s press conference in commentary on Phase 3: “The commissioning date is not within our control entirely. We have to see the return of the visitors, which is something that the [Macau] government also wants.”

The firm stated in a Wednesday filing to the Hong Kong Stock Exchange that the Raffles-branded hotel would open to “align” with “market conditions”, and that would be followed by other Phase 3 elements: the Galaxy International Convention Center; and another hotel, called Andaz Macau.

The vice-chairman said in his comments regarding Phase 3, during the second-half and full-year results press conference: “Basically our construction has been done. We are now taking delivery of the works, and are now working with the government departments concerned. We will support the government, so that the permits will be issued in a timely manner for us.”

A presentation document issued on Wednesday and accompanying the full-year results, said Galaxy Macau Phases 3 and 4 combined would have: approximately 3,000 “high-end and family rooms and villas”; 400,000 square feet (37,161 sq metres) of meetings, incentives, conferences and exhibitions (MICE) space; a 500,000 sq ft multipurpose arena with 16,000 seats; food and drink outlets; shops and “casinos,” among other things.