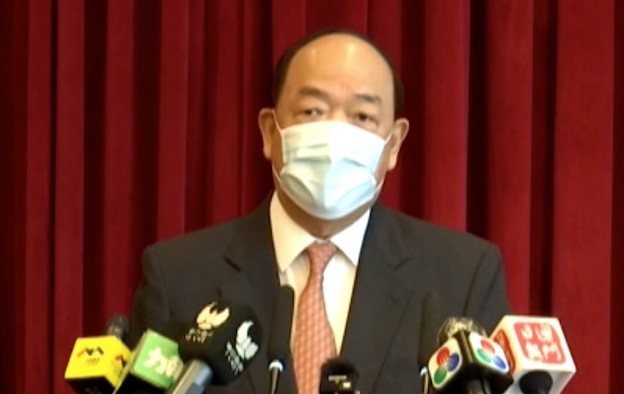 Macau’s Chief Executive, Ho Iat Seng, on Tuesday said reports of fresh cases of Covid-19 in the neighbouring mainland China province of Guangdong were likely to have an impact on the recently-started “tourism recovery” in Macau.

But Mr Ho (pictured in a file photo) added he hoped visitors from parts of the mainland beyond Guangdong would help the industry’s performance, and stated he had confidence in the ability of the Guangdong government to curb the spread of the disease.

Mainland China is the only place to have a largely quarantine-free travel bubble with Macau, amid existing travel restrictions as countermeasures against Covid-19. Guangdong province has been the largest-single source of Macau’s inbound mainland Chinese tourists in recent months, according to official data.

Nonetheless, in recent days, the number of mainland communities – including districts of Guangzhou and Shenzhen in Guangdong – where residents would be subject to quarantine on arrival in Macau, has been growing, linked to a surge of Covid-19 cases in those communities. Macau inhabitants have also been advised by the city’s government not to visit affected places in Guangdong.

Mr Ho was speaking about the tourism outlook, while on the sidelines of a public event in Macau at the newly-refurbished Macao Grand Prix Museum.

She said the freshly-announced Guangdong Covid-19 cases had had an “immediate” impact on Macau’s volume of tourist arrivals.

The MGTO boss also said she expected local hotel occupancy could be “slightly affected” by the situation in Guangdong.

During the Tuesday event, the Chief Executive was asked by local media about the situation regarding an expected public tender associated with the expiry in June 2022 of the six current casino gaming licences.

The Chinese-language radio service of public broadcaster TDM cited Mr Ho as saying only that the current gaming concessions still had a year to run, and the government would work on relevant amendments to Macau’s gaming law in the second half of this year.

Some Macau casinos visited by GGRAsia on Thursday, actually had tables that were closed, notwithstanding strong consumer demand during Chinese New Year (CNY). The reasons for some tables being... END_OF_DOCUMENT_TOKEN_TO_BE_REPLACED