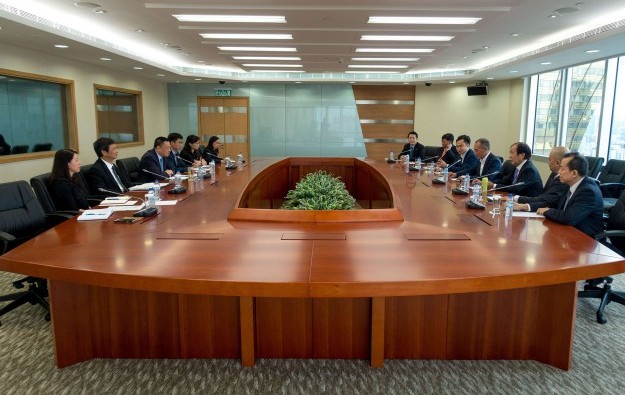 Representatives of the Macau Junket Operators Association on Tuesday had a meeting (pictured) with Secretary for Economy and Finance Lionel Leong Vai Tac to petition the city’s government to allow smoking lounges inside VIP rooms. The call is to allow such facilities if a full tobacco ban in casinos is approved.

The junket sector argues that VIP rooms are not really public areas in the manner of main casino floors. Its lobbyists add that a separate smoking lounge in VIP areas would still protect the health of the dealers and other casino workers – and prevent high rollers from breaking their play in order to go outside to puff a cigarette or cigar.

The head of the association, Kwok Chi Chong, said that if smoking lounges were not allowed inside VIP rooms, the sector would suffer a huge blow. “We believe that once a full smoking ban would be implemented in VIP gaming areas, it would be fatal”, Mr Kwok told reporters after the one-hour meeting with Mr Leong.

He added that junket operators were not opposing a full smoking ban inside casinos.

“We do not oppose the government carrying out measures to control smoking in casinos… but we want our businesses to survive,” Mr Kwok said.

Karen Tang, an analyst at Deutsche Bank AG, said in a note in January that a smoking ban in Macau’s high roller areas could see VIP gross gaming revenue (GGR) fall by 15 percent. The base of VIP baccarat GGR fell by 42 percent year-on-year in the first quarter, according to official data.

The Macau government has so far appeared to rule out the possibility of allowing smoking lounges in any part of Macau casinos if a full smoking ban is approved.

Union Gaming Research Macau Ltd analysts Grant Govertsen and Felicity Chiang said in a Monday note that the fact mainland authorities had that day introduced tough new rules on public smoking in Beijing – including, according to mainland media, the closure of smoking lounges at Beijing Capital International Aiport – might give Macau “political cover to do away with casino smoking lounges”.

In a press statement issued after Tuesday’s meeting, Mr Leong said junkets needed to fulfil their social responsibilities on smoking control. He noted that any increase in gaming revenue couldn’t be at the expense of the health of casino workers or visitors.

Mr Leong stated that the government would bear in mind overall public opinion, as well as the opinions of industry operators and workers, ahead of introducing any changes to current smoking rules. The government has previously stated it plans to put forward later this year a bill proposing a full smoking ban inside casinos.

Despite the opposition of casino operators and junkets, the Macau government still plans to push ahead with a complete smoking ban in the city’s casinos, Mr Tam told reporters at the weekend. He again suggested that the smoking ban is not directly correlated to the slump in gaming revenue.

Casino GGR in Macau fell 37.1 percent year-on-year in May to approximately MOP20.35 billion (US$2.55 billion). It was the 12th month in succession for such market wide decline, confirmed official data released on Monday.

Macau’s casino gross gaming revenue (GGR) for the first five days of February is estimated at MOP1.9 billion (US$235.1 million) – or MOP380 million per day – a level that suggests a “45... END_OF_DOCUMENT_TOKEN_TO_BE_REPLACED