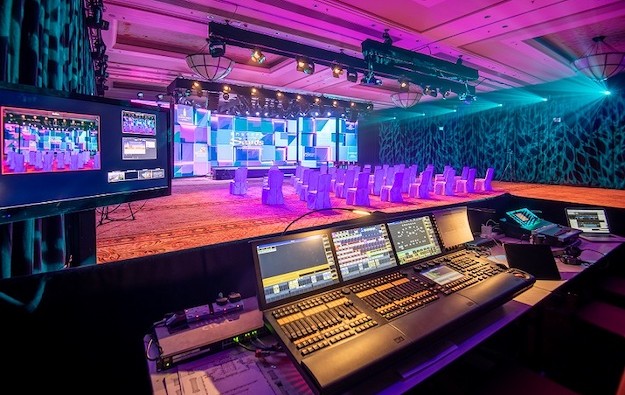 Offering the hybrid facility to event organisers was “in anticipation of the return of both robust tourist arrivals and regional and international MICE events,” said the company in a Friday press release.

The Londoner Macao’s “Smart Stage” is said to offer “professional broadcast quality live-streaming capability and hologram functionality,” the latter in order to present the image of off-site participants.

The facility is described by Sands China as offering “extended reality” also referred to as “XR”. The release stated: “Unlike the classic ‘green screen’ environment, XR allows presenters to interact with real-time visual markers to deliver a more authentic experience.”

The facility had been created by the same in-house entertainment production team that had overseen productions from headline musical acts appearing at Sands China venues, including the Rolling Stones, Alicia Keys and Bruno Mars, said the firm.

“The Smart Stage at the Londoner Macao beautifully complements our existing MICE and entertainment offerings, especially as we complete the final touches of our new state-of-the-art 6,000-seat multipurpose Londoner Arena, also at our the Londoner Macao property,” said Kris Kaminsky, senior vice president of hotel operations at Sands China, as cited in the release.

The arena at the Londoner Macao is set to open this year, said Robert Goldstein, chairman and chief executive of the property’s promoter, Sands China Ltd. His comments were included in the company’s preliminary 2021 annual results, filed on Friday to the Hong Kong Stock Exchange.

That and other fresh facilities at the Londoner Macao, are expected to “open in 2022”.

Mr Goldstein, also chairman and chief executive of Las Vegas Sands Corp, the United States-based parent of Sands China, had admitted during an investor event at the start of the month, that there had been “24 months of confusion and frustration,” with regard to the timing of measures to ease further the inbound flow of tourists to Macau as the market looks to recover from the effects of Covid-19 –related restrictions. Though he noted: “The ‘switch’ will go on: when it goes on; we can’t predict.”

A spokesman for a MICE trade association in Macau was this week quoted in the local media saying the mainland authorities were facilitating business visas for mainland residents wishing to attend as delegates at upcoming exhibitions in the city.

In August 2020, Marina Bay Sands, the Singapore casino resort of the Las Vegas Sands group, had announced the launch of an in-person and online MICE event studio, as a market response to the constraints on tourism and in-person events that existed in the city-state at that time.

Casino equipment supplier Sega Sammy Creation Inc said in a Friday release it was debuting its Genesis Crest 43J cabinet in Asia. The product will be available at an in-person trade show, G2E Asia:... END_OF_DOCUMENT_TOKEN_TO_BE_REPLACED