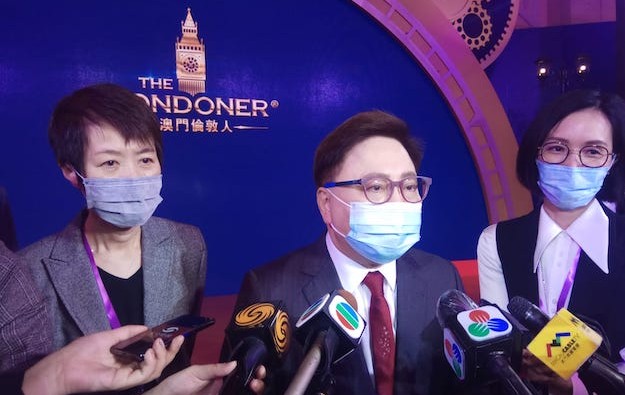 The Londoner Macao – a revamped and rebranded Cotai casino property that had its first-phase launch on Monday, just ahead of Chinese New Year – is designed to bring new customers to the Macau gaming-resort market, rather than eat into the share of consumers that already come to the city, said Wilfred Wong Ying Wai (pictured), president of the venue’s promoter, Sands China Ltd.

A “soft opening” – over the Christmas and calendar-new-year period – of the Londoner Macao, a British-themed resort, indicated it appealed to tourists that might not otherwise visit Macau, Mr Wong told reporters on the sidelines of the launch.

People that previously “had no plan” to come to Macau, had booked a stay at the property, the executive stated.

“I don’t think we are cannibalising any of our hotels,” he added, referring to the other Macau properties of Sands China, including the themed resorts the Venetian Macao and the Parisian Macao. Visitor volumes to Macau have been dramatically down in the past year, but to disruption linked to the Covid-19 pandemic.

The revamp and addition of facilities has been described by Sands China’s parent, United States-based Las Vegas Sands Corp, as a US$1.9-billion project.

It includes a rebranded “Londoner Hotel”, with 600 suites, which opened to paying customers on January 22.

Londoner Court, a 370-suite hotel facility on site, is due to be “completed in the first quarter” and to be launched later this year, according to the firm’s information.

Mr Wong was asked by GGRAsia what role VIP clubs would have at the rebranded property. Suncity Group, Tak Chun Group and Guangdong Group, all have a presence.

“Right now the VIP segment is relatively weak,” he said. But he added the presence of those junket brands  showed they had “confidence” in the rebadged property’s ability to “attract their customers”.

With the accommodation towers of Sheraton Grand Macao Hotel, Conrad Macao and The St Regis Macao – as well as the company’s self-branded accommodation, the Londoner Hotel – the revamped Londoner Macao presented an “array of choices” for travellers, Mr Wong remarked.

“The question is whether we can altogether make the pie bigger. Because the more good [-quality] facilities are available, the more attractive the destination is,” said the Sands China president.

He added: “If we are all able to do well, and when the Covid-19 factor is gone and tourists are all coming, this should not be an issue. We have our goal set for the long term… the Covid-19 situation will, some day, pass.”

Macau’s casino gross gaming revenue (GGR) for the first five days of February is estimated at MOP1.9 billion (US$235.1 million) – or MOP380 million per day – a level that suggests a “45... END_OF_DOCUMENT_TOKEN_TO_BE_REPLACED