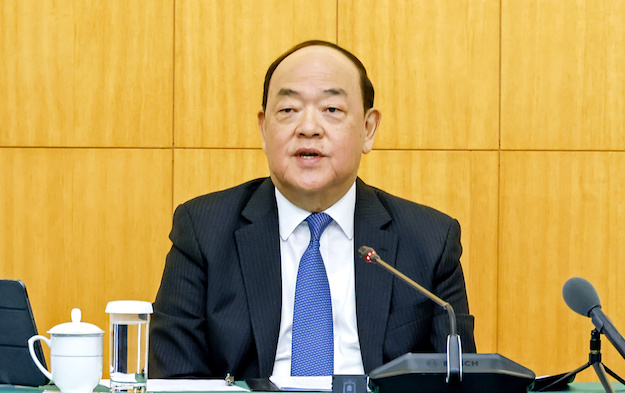 Macau’s Chief Executive, Ho Iat Seng (pictured), gave non-committal answers to local media on Tuesday when quizzed about the possible refreshment of the city’s six gaming concessions, and the timetable to complete the review of the city’s gaming law.

“We are now compiling the opinions collected during the public consultation period” regarding the amendment of the gaming law, said Mr Ho. “We need then to start the legislative process by submitting the bill to the Legislative Assembly,” he added.

The Chief Executive’s remarks were made during a press conference following the reading earlier in the day – in the city’s Legislative Assembly – of the local government’s policy address for 2022.

The Macau government has said previously that there will be a new public tender process associated with the expiry of the current casino licences in June 2022, although Macau’s gaming law is due to be amended prior to such a process. The government had previously mentioned the intention to complete the latter task by the fourth quarter this year.

Mr Ho said in his Tuesday comments to the media, that the amendment of the gaming law would be done in accordance with guidelines announced by the government in September, which covered nine main topics “that need to be addressed”.

The topics included: how many public concessions there should be; the duration of any new concession term; what new regulatory requirements should be applied to concessionaires; the pre-vetting by the government regarding operator shareholder dividends; and the introduction of government-appointed delegates to provide oversight of Macau operators.

On Tuesday, the Chief Executive did not disclose a timetable to complete the review of the city’s gaming law framework. He also did not say if the revision would be finalised before the expiry of the six gaming concessions in June 2022.

“Once we complete the review of the gaming law, we will proceed with the [retender] process step by step,” stated Mr Ho. “If the public tender cannot be done in time, there is an existing mechanism that allows for the extension” of the gaming licences, he added.

Pending a fresh public tender, Macau’s current gaming law allows for extension of the existing licences, up to a maximum of five years from the original 20-year term.

Mr Ho said in his Tuesday remarks: “We will ensure that the city’s gaming industry develops in a healthy way, and this is also understood by the six operators.”