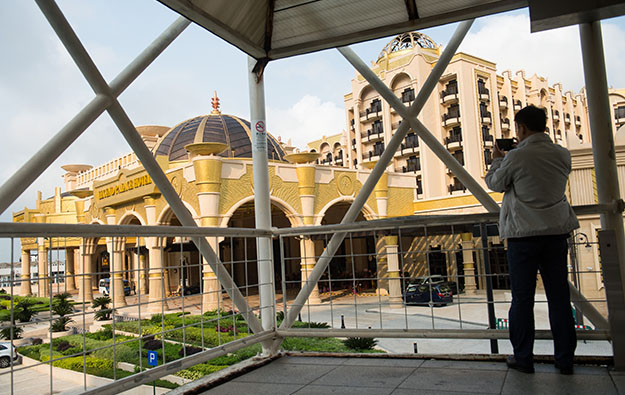 Hong Kong-listed Macau casino services firm Macau Legend Development Ltd says it expects its stock to be suspended from quotation on that bourse with effect from 9am on April 1.

In a Wednesday filing, the company said this was because it “may not be able” to publish its 2021 annual results “on or before” March 31, as required under stock market rules.

The company added this was “due to the travel restriction and quarantine measures occasioned by the Covid-19 pandemic, which inevitably brings difficulties to the financial reporting and consolidation process of the company’s operations, and thus will require additional time to complete the process”.

Macau Legend oversees a number of so-called satellite casinos in Macau – including the Legend Palace casino hotel at Macau Fisherman’s Wharf (pictured) – under the Macau gaming licence of SJM Holdings Ltd. It also has several non-gaming hotels and leisure facilities at Fisherman’s Wharf. In addition, the firm owns a casino resort in Laos and is developing a gaming project in Cape Verde.

The appointment came after the arrest of former Macau junket boss Levo Chan Weng Lin in January – described at that time as Macau Legend’s largest-single shareholder.

Following his detention by Macau authorities on suspicion of illegal running of gambling operations and money laundering,  Mr Chan resigned from his roles as an executive director, the co-chairman and the chief executive of the Macau Legend, with effect from January 31.

Macau satellite casinos are venues controlled by independent investors, but respectively piggyback currently on the gaming licence of one of the existing concessionaires.

Satellites will still be permitted under Macau’s proposed new regulatory system – to be established prior to an anticipated fresh public tender for Macau gaming rights – but they will each be given a three-year grace period to tie the ownership of their gaming premises to any of the city’s six concessionaires, states the city’s gaming law amendment bill.

Macau is to create distinct zones on its casino floors and designated gambling chips that will be solely for the use of players from overseas. The moves will be part of a new gaming tax system to... END_OF_DOCUMENT_TOKEN_TO_BE_REPLACED