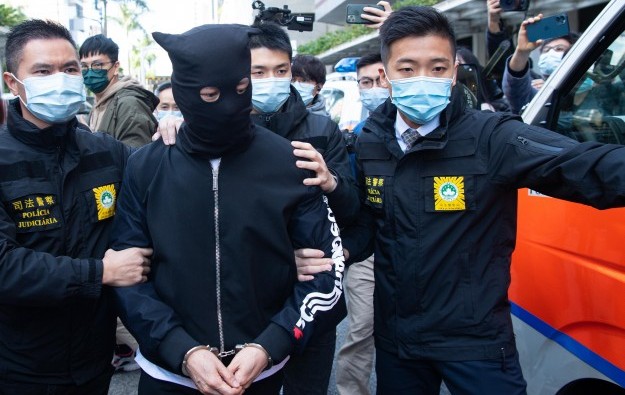 The Public Prosecutions Office stated in its note that Mr Chan’s arrest sprung from further investigation linked to the detention in November of Alvin Chau Cheok Wa, the boss of junket brand Suncity Group. At the time, the Public Prosecutions Office said Mr Chau was suspected of being a leader of a “criminal group”, rather than of a triad – the latter being a more serious crime under Macau law.

The alleged investigative link between Mr Chan and Mr Chau already had been mentioned by the Macau Judiciary Police during a press conference over the weekend on the arrest of Tak Chun’s boss.

The Public Prosecutions Office said in its Monday note that Mr Chan was suspected of illegal running of gambling operations and money laundering in partnership with the criminal group led by Mr Chau. The local authorities did not provide further detail on this topic.

The note from Macau’s Public Prosecutions Office confirmed a total of four people connected to the case – including Mr Chan (pictured while being transported by the Macau police) – had been detained since Friday. Only Mr Chan had been placed under pre-trial arrest, following a decision by a local judge.

In aggregate, a total of 15 people has been detained since November, linked with the Alvin-Chau-Levo Chan investigation, of which six remain under pre-trial arrest, according to Macau’s Public Prosecutions Office.

Regarding the latter crime, the Judiciary Police said on Sunday that Mr Chan was suspected of facilitating a form of under-the-table betting for high rollers in Macau, referred to by some commentators as the “multiplier”.

With the multiplier, the bet denominated at the casino gaming table actually represents a bet made privately between the player and a junket industry associate that can be a multiple many times the ‘official’ one. Macau’s gaming tax, levied at a rate close to 40 percent of the gross, is paid only on the ‘official’ bet.

The Public Prosecutions Office said that the alleged criminal activities undertaken by the quartet – including Mr Chan – had produced “a negative impact on Macau’s social order, and on the stable and sustainable development of Macau’s gaming sector”.

One of the other people detained was businessman Choi Wai Chan. According to the Public Prosecutions Office, he is suspected of the crime of disobedience. The two other suspects – surnamed Chow and Chan – are suspected of providing either assistance or support for someone suspected of having committed a crime. The office however stated the three suspects could still face other types of charge.

The note from the Public Prosecutions Office did not clarify whether the criminal case had any link with the junket brand Tak Chun, which Mr Chan had led.

Macau recorded 965 “gaming-related” crimes in full-year 2022, down 29.7 percent on the 1,372 identified in the previous year, according to the latest statistics published on Tuesday by... END_OF_DOCUMENT_TOKEN_TO_BE_REPLACED