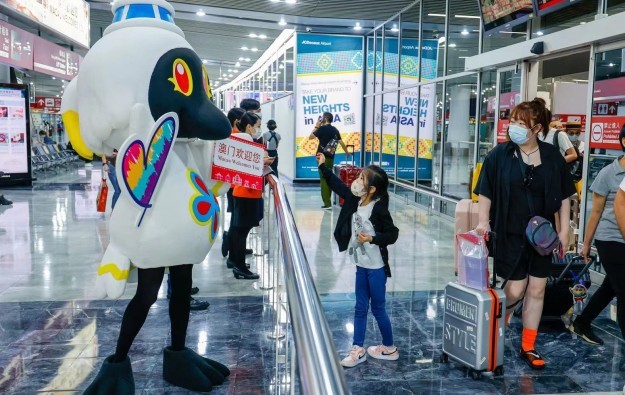 China’s State Council has designated the first seven days of next month as the holiday period incorporating China’s National Day, on October 1.

“The fact that the [Covid-19] pandemic situation has largely stabilised in mainland [China], and the strong… demand” among mainland consumers from Guangdong, “our biggest feeder market,” to travel to Macau using China’s Individual Visit Scheme exit visa system, “bodes well for the National Day break for us,” Mr Wu told GGRAsia.

On that basis, Macau’s tourism market might fare even better than it did during May Golden Week, the period including the Labour Day holiday on May 1, suggested Mr Wu.

At that time, Macau had seen some comeback in its visitor volume, after the prolonged disruption from the Covid-19 pandemic, only to see numbers slide again after some uptick in Covid-19 cases on the mainland.

During May Golden Week - designated this year as five actual days of public holiday in China – Macau’s daily average visitor arrivals were circa 33,000, and average hotel occupancy was 83.2 percent daily, according to official data.

The trade during Autumn Golden Week could benefit from promotional discounts on accommodation still being offered by the Macao Government Tourism Office (MGTO).

That was likely to have “big appeal” to mainland Chinese, Mr Wu said. “That will work to encourage these travellers to stay longer in Macau during the holiday,” the travel trade representative remarked.

He added that Cotai resorts – many with an array of recreational facilities – were likely to be more appealing to mainland tourists than casino hotels and resorts on Macau peninsula.

“It is possible that we could see Macau’s average hotel occupancy rate be in the range of 70 percent to 80 percent for the National Day break,” Mr Wu told GGRAsia.

The Autumn Golden Week break is traditionally a peak time for the city’s tourism trade. In 2019 – the most recent pre-pandemic trading period – Macau had seen over 980,000 visitor arrivals – or a daily average visitor tally of 140,714 – for that seven-day October holiday period, according to tourism bureau data.

A Macau court was offered evidence on Monday, including of recordings from police-wiretapped telephone conversation, that the prosecution says proves the direct involvement of Levo Chan Weng Lin... END_OF_DOCUMENT_TOKEN_TO_BE_REPLACED