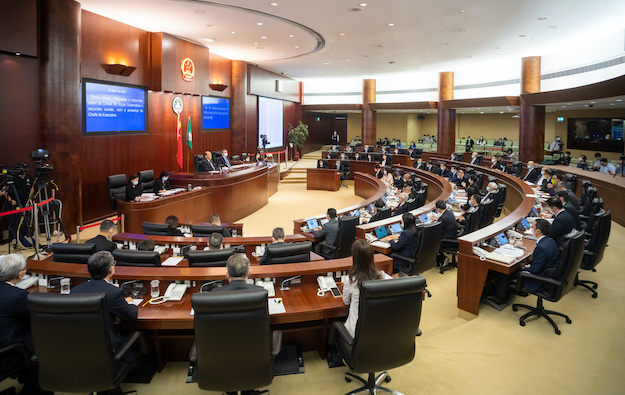 “We have not been executing our existing [gaming] law thoroughly. And now we hope that with this amendment, we can enhance the industry’s standards and do better,” stated Mr Ho.

The Chief Executive was speaking during a question-and-answer session (pictured) with members of the city’s Legislative Assembly.

The Macau government is proposing to reshape the gaming regulatory framework as the city prepares for a fresh public tender for Macau gaming rights, associated with the anticipated expiry of the current six concessions this year.

Mr Ho said Macau’s casino industry was currently facing one of its lowest points, but noted that was also a “chance” to rid the sector of its “problems”. That would be done by implementing fresh “criteria for a healthy development” of the casino industry, in order to “gain the support of the mainland” authorities, he added.

The city’s leader admitted that Macau’s gaming industry had seen previously unlawful practices, which the draft law sought to address.

Mr Ho stated that the government intends to forbid junkets to share casino revenue with any gaming concessionaire with which they work, and ban a form of under-the-table betting for high rollers in Macau, referred to by some commentators as the “multiplier”.

These practices “are illegal, and the multipliers are a serious breach of law,” stressed Mr Ho.

With the multiplier, the bet denominated at the casino gaming table actually represents a bet made privately between the player and a junket industry associate that can be a multiple many times the ‘official’ one

Mr Ho added: “The [multiplier] practice is a serious act of tax evasion and has a negative impact on the mainland, and on money laundering efforts.”

There are two main elements to the regulatory update: an amendment bill relating to the existing gaming law, and a proposed new statute specifically to cover junket-based VIP gambling business. Details of the proposed junket bill were disclosed in late March.

Mr Ho also said the government was aware of concerns regarding the possible closure of a number of so-called satellite casinos in the city, and the likelihood of an increase in the unemployment rate.

The new regulatory requirements mulled for Macau satellite casino operators say satellites will still be permitted to run in the local market. But they will each be given a three-year grace period to tie the ownership of their gaming premises to a local concessionaire.

Mr Ho recalled that any casino “must be in premises owned by a casino concessionaire,” and that three years should be sufficient to ensure a smooth transition.

“The [gaming] assets have to revert to the government [at the end of a concession], so that these assets could be seamlessly given to any new operator that wins the gaming rights,” stated the city’s leader.

Business at satellite casinos was already precarious amid the disruption to the city’s tourism during the Covid-19 pandemic, meaning their survival is in doubt without other regulatory factors coming into play, several industry comentators told GGRAsia.

The Macau government hinted on Friday it might under the proposed update to the city’s gaming framework, permit some kind of performance-related system – linked to “turnover”... END_OF_DOCUMENT_TOKEN_TO_BE_REPLACED