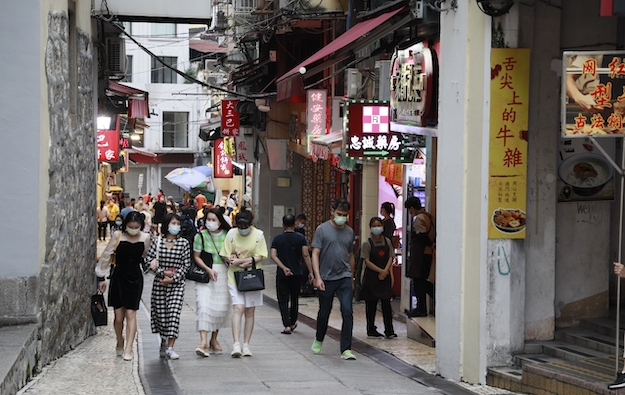 The head of a leading Macau tourism trade body has called for an easing of the Covid-19 testing rules for visitors from mainland China, ahead of two important holiday periods.

Andy Wu Keng Kuong, president of the Macau Travel Industry Council, said it was “crucial” to the prospects of strong business for the upcoming Mid-Autumn Festival and National Day holiday periods to ease the nucleic acid test validity period to seven days, from the current 48 hours for travellers arriving via Zhuhai in neighbouring Guangdong province – the main overland gateway for mainland tourists.

Brokerage Daiwa Capital Markets Hong Kong Ltd had said in a recent note that “the 48-hour NAT [nucleic acid test] requirement” for travel inbound to the casino hub “via Zhuhai-Macau checkpoints is still quite restrictive”.

The memo had added that recent modest easing efforts in terms of cross-border travel rules were unlikely to bring any “meaningful” uplift to the city’s visitor volume and to gross gaming revenue (GGR) in the city’s casinos.

China’s State Council has designated September 10 to 12 inclusive as the holiday period for the Mid-Autumn Festival; and October 1 to 7 inclusive for the holiday encompassing National Day on October 1. The latter is often referred to by the tourism trade as autumn “Golden Week”.

Macau began on the Chinese mainland on Sunday the latest promotional drive for its tourism industry, after the daily tally of inbound visitors to Macau reached 18,620 on Saturday.

In July, the city’s casinos were closed for 12 days as a countermeasure against community spread of Covid-19, in the worst Macau outbreak since the start of the pandemic alert in early 2020.

For a period during the outbreak emergency – and up to August 3 – a seven-day quarantine-on-arrival was required for outbound travel to Zhuhai from Macau, rendering impractical most tourist trips from the mainland.

Journeys to Zhuhai from Macau currently still require a certificate, issued within 24 hours of intended departure, showing a ‘negative’ result for Covid-19 infection.

According to data released on Monday by Macau’s Statistics and Census Service, the average occupancy rate of Macau hotel rooms in July dropped by 25.6 percentage points year-on-year to 38.1 percent, which the authorities said was “owing to the lingering impacts of the coronavirus pandemic”.

FBM, a maker of casino slot machines and an international specialist in electronic bingo machines, is to launch its “Jin Qián Link” slot product at Global Gaming Expo (G2E) 2022 at the Venetian... END_OF_DOCUMENT_TOKEN_TO_BE_REPLACED