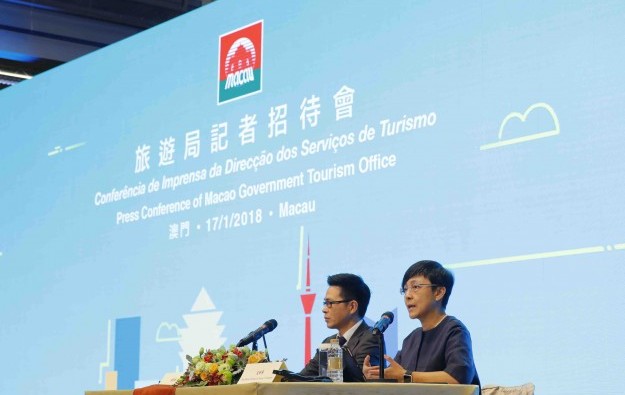 Total visitor arrivals to Macau exceeded 32.6 million in 2017, up 5.4 percent year-on-year, according to preliminary figures announced on Wednesday at an annual press conference of the Macao Government Tourism Office (MGTO).

Maria Helena de Senna Fernandes (pictured right), director of the tourism bureau, said during a question and answer session at the event that her department predicted the 2018 visitor tally would rise by “1 percent to 3 percent” year-on-year.

“Regarding the estimation for this year… I believe we are relatively conservative on this. The number of last year was relatively high,” stated the tourism director. “Therefore, our estimate is that the [overall] growth of this year will be between 1 percent and 3 percent,” she added.

On January 4, Macau International Airport Co Ltd said improvements planned for 2018 at the city’s air hub should help boost its passenger traffic capacity to 7.5 million movements per year. The Hong Kong-Zhuhai-Macao Bridge linking the city to Hong Kong International Airport via a direct road route across the Pearl River Delta is also due to open this year, which some investment analysts have said should boost tourism to Macau.

In an announcement posted on its website on Tuesday, the airport company said it anticipated 7.35 million passenger traffic movements in 2018, which would be a year-on-year rise of 2.7 percent.

In terms of general visitors to the city, the annual 2017 increase came despite the disruption wrought in late August by Typhoon Hato, which brought the worst flooding and damage seen in Macau for half a century, and severely affected the tourism industry. The tally of same-day visitors fell by 6.2 percent that month.

The tourism office said in a statement issued following the briefing that in 2018 it would “vigorously implement” strategies and recommendations proposed by the Macao Tourism Industry Development Master Plan, which was published in September last year. Amid all the general enthusiasm for ever-increasing numbers of visitors, the plan seeks to address a number of issues including quality of life for locals, and how to ensure that quality of experience for visitors is not tarnished by overcrowding.

“We always stress that growth is not our major concern,” Ms Senna Fernandes said during Wednesday’s press conference. “What we seek is to put more effort on the overnight tourists. In fact, we have already seen some significant growth there, and will continue to work on that, as well as on international tourists,” she added.

In 2017, more than 29.4 million visitors came from the Greater China markets – the mainland, Hong Kong or Taiwan – a rise of 5.3 percent.

The city welcomed over 20 million mainland visitors last year, up by 8.5 percent from 2016, with 41 percent of the visitors from China’s Guangdong province. The figure includes more 10 million visitors under the Individual Visit Scheme (IVS), a system allowing independent outbound travel for visitors hailing from certain economically-developed cities. Arrivals via IVS visa constituted 47.8 percent of mainland visitor arrivals. Visitor arrivals from Hong Kong and Taiwan region dropped by 4 percent and 1.3 percent during 2017.

Among international feeder markets, South Korea continued to rank first, contributing more than 870,000 visitors to Macau, a rise of 32 percent in 2017. Arrivals by Japanese visitors climbed by 9.4 percent. The tally of visitors from the Philippines and Indonesia rose by 7 percent and 8 percent respectively.

The average length of stay stood at 2.1 days for overnight visitors and 1.2 days for all visitors.

The preliminary figures indicate that the total of overnight guests at hotel establishments increased by more than 8 percent, to in excess of 13 million last year. The average occupancy rate of hotel establishments in Macau in 2017 exceeded 88 percent, a year-on-year increase of more than 5 percentage points. The average room rate of three- to five-star hotels last year was US$160.30, down by 0.2 percent, according to the tourism bureau.

Up to the end of 2017, there were 116 hotel establishments in Macau supplying a total of 37,901 rooms, a year-on-year increase of 0.7 percent. The number includes 49 budget accommodation establishments with an aggregate of 1,736 rooms.

Total visitor expenditure between January and September 2017 – excluding spending on gaming – amounted to US$25.7 billion, up 16.1 percent from the prior-year period.