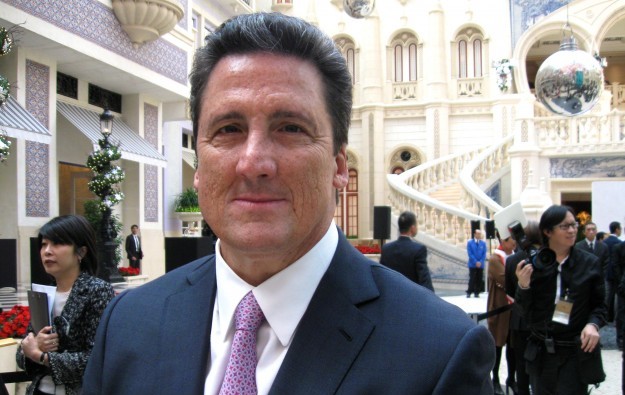 The boss of the parent company for Macau casino operator MGM China Holdings Ltd says he expects “in the next 60 days” there will be news about whether either the firm’s current Macau gaming rights will be extended for a period, or a “process” associated with a fresh round of rights issuance will be announced.

“I do believe in the next 60 days – give or take – we should hear something around either extension or process, and so we are hopeful,” said Bill Hornbuckle (pictured in a file photo), president and chief executive of United States-based casino group MGM Resorts International.

He was speaking on Monday at the JP Morgan Gaming, Lodging, Restaurant & Leisure Management Access Forum, from Las Vegas, Nevada, in the U.S.

The current Macau rights of MGM China – along with those of the other five rights holders – are due to expire in June next year. The present Macau gaming law permits the current concessions to be extended in increments – up to a maximum of five years – beyond their current lifespan.

“We are all just trying to figure our way through this,” stated Mr Hornbuckle. “We don’t have an official word. As you all know, the clock is ticking,” he added.

Other Macau operators including Wynn Macau Ltd have recently mentioned they expect the Macau government will opt for interim extension of the existing gaming rights.

“We are believing it gets extended: time to tell,” said Mr Hornbuckle at the JP Morgan event.

“That’s obviously up to the government,” noted the executive. “There is a public process it has to go through. The timing is getting extremely difficult to get accomplished. But we are going to wait and see,” he added.

The MGM Resorts CEO also gave some commentary on the overall prospects of MGM China being able to continue operations in the Macau market beyond next June.

“I would say we’ve done a lot in that marketplace, particularly over the last two years, in being great corporate citizens,” stated Mr Hornbuckle.

He added, referring to an August alert in Macau after four locals were confirmed infected with the Delta variant of Covid-19: “The good news is, that despite the sensitivity around Covid[-19], that market is returning. We went from making decent money in July, to no money in August, to now in September, making a bit of money again. Things are turning for the brighter day, hopefully.”

The MGM Resorts CEO was asked during the forum whether he had any concerns that the Macau casino market might face heightened oversight from China’s central government, in the manner seen recently applied on the Chinese mainland, to private education, some technology sectors, and video games.

“Whether it be structure, whether it be licensing: how they [the authorities] think about it, is yet to be determined,” he added.

Macau mass-market casino gross gaming revenue (GGR) for the recent Chinese New Year (CNY) holidays could have recovered to at least 60 percent of that for the 2019 break, when the festivities were in... END_OF_DOCUMENT_TOKEN_TO_BE_REPLACED