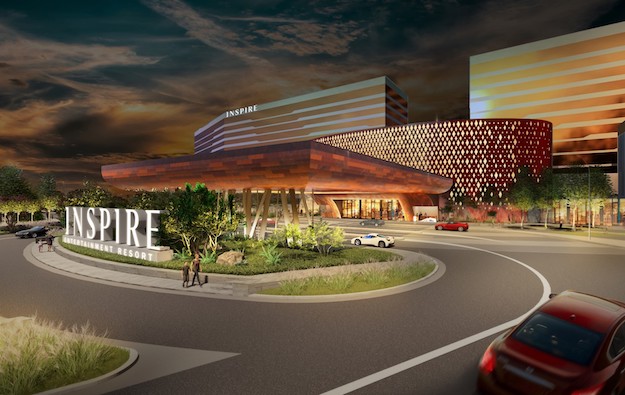 Mohegan had announced in late 2019 the appointment of Hanwha Corp as the main contractor for Inspire Entertainment Resort (pictured in an artist’s rendering). At the time, it was announced that, aside from unit Hanwha Engineering & Construction Corp being the general contractor, the South Korean group would also provide what was described as a “guarantee of completion”, providing a KRW100.0-billion (approximately US$80.3-million at current exchange rates) investment into the project.

Hanwha Hotels & Resorts Co Ltd, also part of the Hanwha group, has an agreement to manage non-gaming offerings at the property, including hotel operations.

In Friday’s filing, Mohegan reiterated Hanwha Corp’s commitment “to make a subordinated investment” in the form of “non-registered, non-guaranteed junior convertible bonds”, to be issued by Inspire Integrated Resort Co Ltd, the operator of the entertainment and leisure complex.

Mohegan added that the two parties had reached an agreement in late December 2022 regarding a first tranche of KRW50.0 billion, with the payment taking place on December 30. A second tranche, of the remaining KRW50.0 billion, “must be funded on or before March 30”.

The convertible bonds bear interest at a fixed coupon rate equal to 5.5 percent per year, and mature at the end of 2032.

Five years after the issue of the convertible nonds, Hanwha shall have the right to convert the bonds into common shares of Inspire Integrated Resort Co Ltd, “not to exceed 5.0 percent” of the total number of outstanding shares of the firm, at an initial conversion price equal to KRW99,960.

When construction is completed, the resort will also have a 15,000-seat multi-purpose arena, according to the promoter.

In its third-quarter earnings presentation deck, Mohegan outlined it had US$620.1 million outstanding – via a mixture of credit and a loan – on the project.

Some Macau casinos visited by GGRAsia on Thursday, actually had tables that were closed, notwithstanding strong consumer demand during Chinese New Year (CNY). The reasons for some tables being... END_OF_DOCUMENT_TOKEN_TO_BE_REPLACED