Mohegan Inspire hotels to be under Hanwha Hotels & Resorts 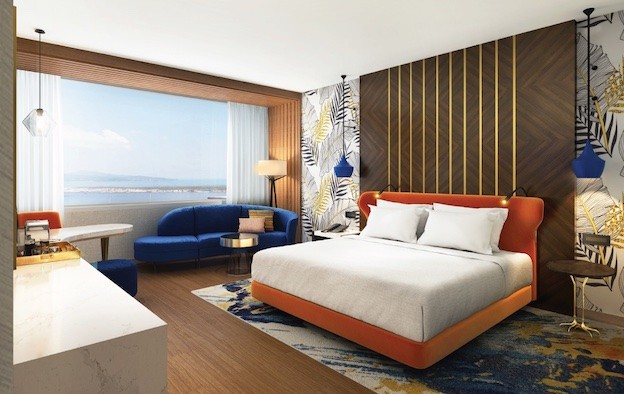 Mohegan Inspire Entertainment Resort, an under-construction foreigner only casino plus leisure complex at Incheon near the South Korean capital Seoul, has signed a deal for Hanwha Hotels & Resorts Co Ltd to manage the property’s three five-star hotel towers. They will consist of 1,270 rooms (example in an artist’s rendering) and suites.

The whole complex is being developed by a local unit of United States-based Mohegan Tribal Gaming Authority, trading as Mohegan. The firm noted in a press release outlining the hotel management deal, that the build for phase one of the resort was “on track now”, and “targeted to open in the fourth quarter 2023”.

Mohegan added that the three 5-star hotel towers were “set to open in the latter half of 2023”.

The gaming resort operator said the tie up with the hotel brand “will enable Mohegan Inspire to combine its 20-plus years of integrated resort development and operational know-how in North America with Hanwha Hotels & Resorts’ premier hotel operational expertise, to design and debut an array of programmes to provide bespoke, luxury hotel experiences.”

Hanwha Hotels & Resorts is also involved in segments including general resorts and golf courses, according to a Mohegan press release. It runs a luxury hotel called The Plaza Seoul, near the capital’s Myeongdong shopping district.

The hotel firm is part of South Korean conglomerate Hanwha Group, according to the latter’s website. The parent is also involved in sectors including green energy, construction, and finance.

Mohegan says the project is on a 4.3 million square metres (nearly 46.3 million sq feet) site at Yeongjong Island near to Terminal 2 of Incheon International Airport, the country’s main air hub.

When construction is completed, the resort will also have a 15,000-seat multi-purpose arena, according to the promoter.

In its third-quarter earnings presentation deck, the company outlined it had US$620.1 million outstanding – via a mixture of credit and a loan – on the project.

Some Macau casinos visited by GGRAsia on Thursday, actually had tables that were closed, notwithstanding strong consumer demand during Chinese New Year (CNY). The reasons for some tables being... END_OF_DOCUMENT_TOKEN_TO_BE_REPLACED