NagaCorp gets casino exclusivity extended to 2045 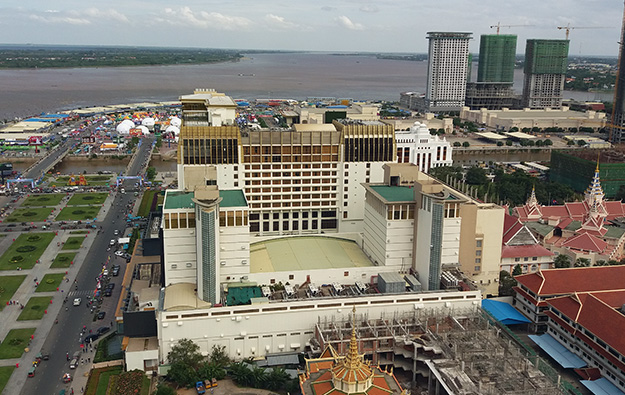 Hong Kong-listed casino operator NagaCorp Ltd says a unit that holds the monopoly casino gaming licence for the Cambodian capital Phnom Penh and within a 200-kilometre (124-mile) radius, has had its exclusivity rights extended by the country’s government for a further 10 years, to December 31, 2045. The previous exclusivity window ran until January 1, 2036.

“It is important to keep in mind that the company’s next project, the approximately US$3.5-billion Naga 3, is anticipated to open in late 2025 when the company would have had approximately ten years of exclusivity remaining,” said analyst Grant Govertsen of Union Gaming Securities Asia Ltd in a Wednesday memo. He was referring to the third phase of the casino group’s NagaWorld casino complex (pictured) in the Cambodian capital.

“The new agreement therefore extends the runway for Naga 3 and makes the return profile that much better and with greater visibility,” added Mr Govertsen.

NagaCorp said in its Tuesday filing on the matter: “The company believes that the signing of the agreement and exclusivity extension till 2045 may be viewed as a long-term tourism infrastructure project which may generate recurrent revenue to the company and its shareholders.”

Tim McNally, chairman of NagaCorp, told GGRAsia in comments prior to Tuesday’s announcement that the Phnom Penh business was growing “because of expansion of tourism on the mass-market side, and the migration of people from all over Asia to Phnom Penh,” for the purpose of “business investment” as well as tourism.

He added the firm had a “very professional” business model and management, meaning “customers have confidence in doing business at our location”.

Some non-monopoly Cambodian casino hubs outside Phnom Penh – namely Sihanoukville and Poipet – have garnered international publicity for allegedly attracting criminal elements to those markets, according to investment analysts.

The 10-year exclusivity extension for NagaCorp is part of a deal signed on Tuesday between the Royal Government of Cambodia and Ariston Sdn Bhd, a Malaysia-incorporated firm wholly owned by NagaCorp.

Tuesday’s deal as a whole allows for NagaCorp to be licensed for casino gaming in Cambodia – beyond the extended exclusivity period up to end-2045 – for a period of 70 years, expiring in 2065.

NagaCorp said factors in being granted the exclusivity extension were: its approximately US$3.5 billion investment commitment to build and open Naga 3, which it said would create “thousands of jobs” and boost tourism; the payment of US$10 million by the Ariston entity to the Ministry of Economy and Finance “upon signing the agreement”; and an agreement for Ariston to pay US$3 million annually to the Cambodian government via the ministry, for 10 years beginning from January 1, 2036 till the end of December 2045.

Tuesday’s filing said some of the key features of the Cambodia casino licence were: no restrictions on the number of tables, electronic gaming machines, gaming space, gaming promoter commissions and rebates, which in each instance gave Nagacorp “the flexibility to optimise its operations over time”.

Most of Macau’s casino operators are likely to generate positive free cash flow in the first quarter, given the robust recovery level of mass-market gross gaming revenue (GGR) in January, relative... END_OF_DOCUMENT_TOKEN_TO_BE_REPLACED