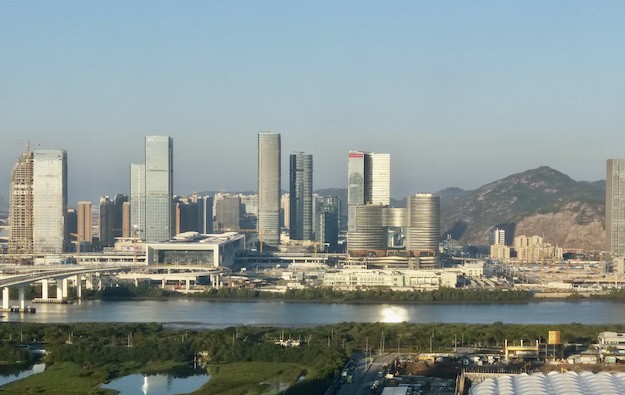 Hengqin island (pictured in a file photo)  is a piece of mainland China territory next door to Macau.

For several years now, a number of Macau casino operators has pledged development of non-gaming in Hengqin.

Last year, Hengqin was earmarked by the Chinese authorities as a special zone to help diversify and expand Macau’s economy beyond a reliance on gaming.

The Guangdong-Macao Intensive Cooperation Zone in Hengqin is being developed jointly by Macau and the neighbouring mainland province of Guangdong, which ordinarily has unique jurisdiction over Hengqin.

Were bidders for new Macau gaming licences to be asked to pledge support for Hengqin, “this would indirectly lower operators’ return on invested capital to some extent,” said JP Morgan analysts DS Kim, Amanda Cheng and Livy Lyu.

Such potential for lowering capital returns would be separate from any uncertainty regarding visitor volumes to Macau and volume of casino gross gaming revenue (GGR) amid the ongoing pandemic, noted JP Morgan.

But the institution added, regarding the likely regulatory outlook for bidders: “We think major disruptions, such as licence losses or tax hikes, are unlikely.”

JP Morgan noted neither of those things had been flagged in a recent summary report of a public consultation held in the autumn on draft proposals for revisions to Macau’s gaming regulatory framework.

The Macau government has said that an update to the gaming regulatory framework would take place prior to a fresh public tender for Macau casino rights.

Last year several Macau law experts suggested in a research paper that bidders for the new public tender for gaming rights might be asked to make non-gaming investments in the Guangdong-Hong Kong-Macau Greater Bay Area. The latter is a Chinese central government initiative to integrate the economies of Macau, Hong Kong and certain Guangdong cities.

Most of Macau’s casino operators are likely to generate positive free cash flow in the first quarter, given the robust recovery level of mass-market gross gaming revenue (GGR) in January, relative... END_OF_DOCUMENT_TOKEN_TO_BE_REPLACED