No request for gaming tables for Coloane project: Macau govt 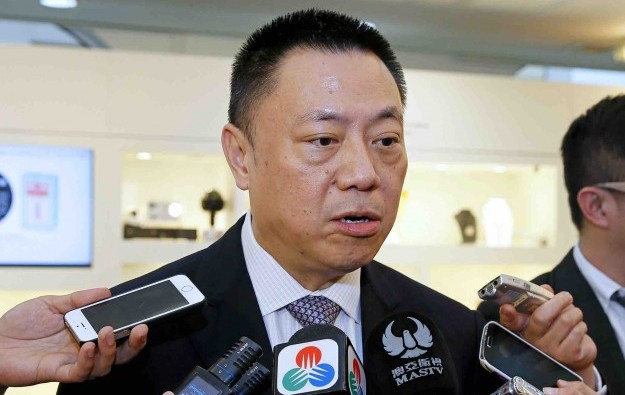 Macau’s Secretary for Economy and Finance, Lionel Leong Vai Tac (pictured), said the local casino regulator, the Gaming Inspection and Coordination Bureau, has not received any application for a casino in a hotel project in Coloane, a district of Macau next door to Cotai.

According to a government statement issued on Thursday, Mr Leong said he did not see any legal restriction on where casinos could be built in Macau, but stressed that the government “would heed the people’s views on building casinos in Coloane, which is the only casino-free island in Macau”.

The context of the government statement quoting Mr Leong was that Legislative Assembly member Au Kam San had asked if casinos would be approved for Coloane.

Mr Leong, in remarks to reporters, stressed that only the six licensed casino operators can make requests for casino facilities and casino tables.

The official said that in assessing any request for gaming tables the government would take into consideration the project’s scope of development, location and “if it would help transform Macau into a world centre for leisure and tourism”, according to the official statement.

Hong Kong-listed Louis XIII Holdings Ltd is currently building a hotel scheme called Louis XIII on the Cotai-Coloane border, which it says in filings is expected to have a casino. In November the scheme was described as a US$1.1 billion project.

The Louis XIII project wasn’t mentioned by name by Mr Leong, nor was it specifically mentioned in the government statement.

Louis XIII had said in previous filings the property was expected to have 66 gaming tables – 50 premium mass and 16 VIP, but the developer has not yet mentioned which Macau casino operator it would rely on for its gaming licence. Any gaming at the venue would operate under what is known in Macau as a service agreement, using the rights of one of the existing six casino concessionaires.

According to Thursday’s government statement, Mr Leong also confirmed that the market wide cap on live gaming tables would not be changed. The government has imposed a cap that seeks to limit the expansion in the number of live dealer tables to 3 percent compound annual growth until end-2022 from a base of 5,485 tables recorded by the authorities at the end of the fourth quarter in 2012.

The imminent return of package tours from mainland China will not only help boost Macau’s tourism businesses, but is also expected to help casinos gain more foot traffic in their mass gaming... END_OF_DOCUMENT_TOKEN_TO_BE_REPLACED