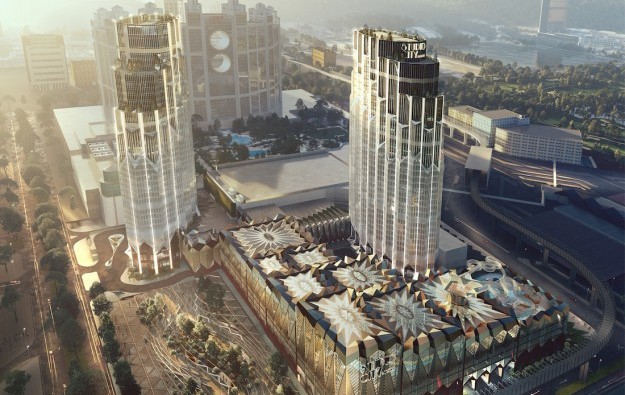 Studio City International Holdings Ltd, promoter of the Studio City casino resort in Macau, says the budget for Phase 2 of the complex (pictured in an artist’s rendering) has been cut to approximately US$1.2 billion, according to a Monday filing in the United States.

That is a 7.7-percent reduction relative to the previously-flagged US$1.3-billion investment for Phase 2. The latter figure was mentioned in a press release in November for the project’s topping out ceremony, and was issued by Melco Resorts and Entertainment Ltd, the gaming operator for Studio City and majority owner of Studio City International.

The new phase is due to feature additional non-gaming amenities, two luxury hotel towers offering an aggregate of “900 rooms”, and some gaming space.

“As of November 30, 2021, we had incurred US$661.2 million of aggregate costs relating to the development of our remaining project, primarily… the initial design and planning costs and construction costs” of Phase 2, Studio City International stated in the Monday filing.

A cost reduction programme was implemented to help manage the challenges faced by the firm due to the Covid-19 pandemic. As a result of the steps, the company said it expected to achieve break-even in terms of adjusted earnings before interest, taxation, depreciation and amortisation (EBITDA) once it achieved approximately “30 percent to 35 percent” of what it termed its historical gross gaming revenue run-rate.

The pace of recovery from Covid-19 related disruption was “highly uncertain”, noted Studio City International in the filing.

The company also confirmed “all gaming promoter arrangements” at the Studio City casino had ceased in December, as it had been stated previously by Melco Resorts. That was despite the VIP rolling chip programme at the property being extended to December 31, 2022.

In the same document, Studio City International mentioned that under Macau’s proposed gaming law, the Studio City casino premises - which it currently controls – might have to be transferred to the operator of gaming at the venue.

As of November 30, Studio City International held cash and cash equivalents of US$552.8 million and restricted cash amounting to US$100,000. At that date, the firm’s total principal amount of outstanding debt was US$2.10 billion.

Studio City International has also announced a proposal for an international offering of senior secured notes, with the net proceeds partially to fund the capital cost of Studio City Phase 2, and the rest being used for general corporate purposes.

In another release, the firm stated that it had subscription agreements for a private placement offering of US$300 million, priced at US$0.75 per share. Its existing shareholders, which hold an aggregate of more than 99.0 percent of the outstanding shares, have subscribed to the offering.

The Macau government hinted on Friday it might under the proposed update to the city’s gaming framework, permit some kind of performance-related system – linked to “turnover”... END_OF_DOCUMENT_TOKEN_TO_BE_REPLACED