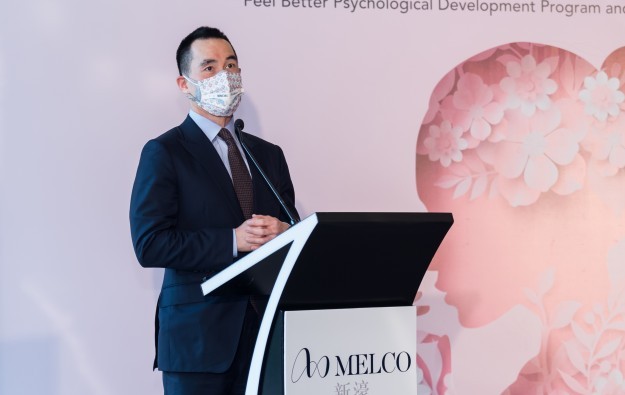 Melco Resorts and Entertainment Ltd expects construction of Phase 2 of its majority-owned Studio City casino resort in Cotai, to be completed “by September”, said the firm’s chairman and chief executive, Lawrence Ho Yau Lung (pictured), in comments to reporters on Saturday on the sidelines of a corporate event in Macau.

Phase 2 is due to include Macau’s first W Hotel – a brand of Marriott International. The hotel is scheduled to open in December 2022, along with the rest of Phase 2, according to corporate information released in December last year.

The extension as a whole is due to have 900 rooms shared between two luxury hotel towers. The “W Macau – Studio City”, is due to have 557 guest rooms, including 127 suites.

The budget for Studio City Phase 2 has been narrowed to US$1.2 billion, from the previously-flagged US$1.3 billion, according to a February corporate filing by the casino resort promoter, Studio City International Holdings Ltd. The latter had also announced – at the time of an offering of senior unsecured notes, concurrent with a private placement of shares relating to Studio City – to support the funding for Phase 2.

During the Saturday event, Mr Ho mentioned Melco Resorts had already applied for a short-term extension of its current Macau gaming licence, as made possible by the Macau government as the latter prepares for a new public tender process for Macau gaming rights.

The city’s Secretary for Economy and Finance, Lei Wai Nong, said on March 3 that the government had already requested Macau gaming operators to submit relevant documents for it to approve the extension of their licences for about six months, to December 31 of 2022.

It is expected the six Macau operators will each have to pay to the government an amount running into the equivalent of millions of U.S. dollars, for the right to such a licence extension.

Macau is to create distinct zones on its casino floors and designated gambling chips that will be solely for the use of players from overseas. The moves will be part of a new gaming tax system to... END_OF_DOCUMENT_TOKEN_TO_BE_REPLACED