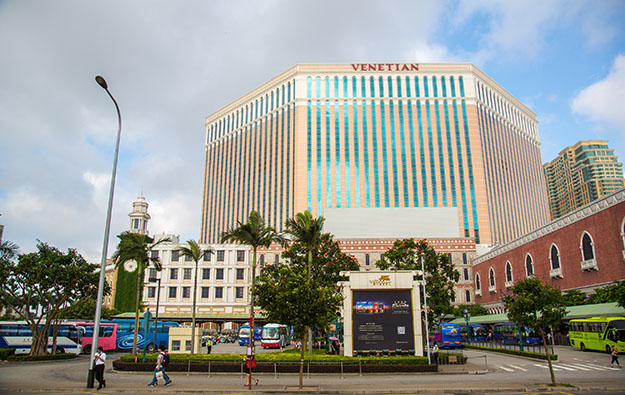 The Macau authorities have confirmed that three people working in a restaurant at the Venetian Macao resort site (pictured in a file photo), on Cotai, have been identified as infected with Covid-19.

The Macao Government Tourism Office (MGTO) sent on Tuesday a memo to Sands China Ltd, the operator of the Venetian Macao, that outlined the fact of some infections among on-site people, but didn’t mention how many individuals were involved.

It added: “To combat the latest wave of the Covid-19 outbreak, we have expanded our response efforts, which include providing two towers successively at the Sheraton Grand Hotel and The Parisian Macao for a total of 6,000 rooms as medical observation hotels, offering Cotai Expo Halls A, B and C as a 24-hour testing station, and providing manpower support at various testing stations – thus playing our part in assisting in the fight against Covid-19 and safeguarding our community.”

Leong Iek Hou, a senior official of the city’s Health Bureau, confirmed at the Wednesday press briefing of Macau’s Novel Coronavirus Response and Coordination Centre, that there were three infected people, and they were workers at the Imperial House dim sum restaurant on the Venetian Macao site.

Macau’s casino floors are currently closed until at least July 18, as a Covid-19 countermeasure, but resort hotels – aside from those being used for official quarantine – are not covered by the shutdown. Many non-gaming facilities in resorts are however already covered by an earlier pause ordered by the city’s Chief Executive.

Lau Fong Chi, a representative from MGTO, confirmed in the Wednesday press briefing that her office had sent the memo to Sands China, and that is was an advisory notice regarding health management of non-infected people on sites run by Sands China. The memo covers several of the company’s properties on Cotai, including The Venetian Macao, The Londoner Macao, The Parisian Macao and the Four Seasons Hotel Macao.

In other developments, the Health Bureau’s Ms Leong also gave some commentary on the efficacy of Macau’s current movement restrictions in terms of community transmission.

Ms Leong stated on Wednesday, referring to a strain of the Omicron variant of Covid-19: “Our community transmission risk is decreasing… but the risk is still there, especially as BA.5.1 is much more infectious than the past variants we knew.”

She added that if “we relax, the cases number will rise again”.

Ms Leong reiterated the government aim is to stick to a zero-case approach, and noted that there were currently still some “hidden” transmission links in the community.

The official also stated during the briefing that the Casa Real casino hotel on Macau peninsula, a satellite gaming venue under the SJM Holdings Ltd licence, had been cordoned off and put under a ‘red code’ status for lockdown.

“Within the property, we have so far seen three staff infected. Considering their frequent contacts with other staff and that they live in a dorm together, we red-coded the property and have applied control measures accordingly,” stated Ms Leong.

Zhuhai city, in Guangdong province, normally the main entry point to Macau for tourists from the Chinese mainland, has seen movement controls imposed in some districts after 27 fresh Covid-19 cases in half a day on Wednesday.

Macau casino operator MGM China Holdings Ltd had a “record” market share in January, and its venues were the “highest-earning businesses” in the portfolio of the majority owner MGM Resorts... END_OF_DOCUMENT_TOKEN_TO_BE_REPLACED